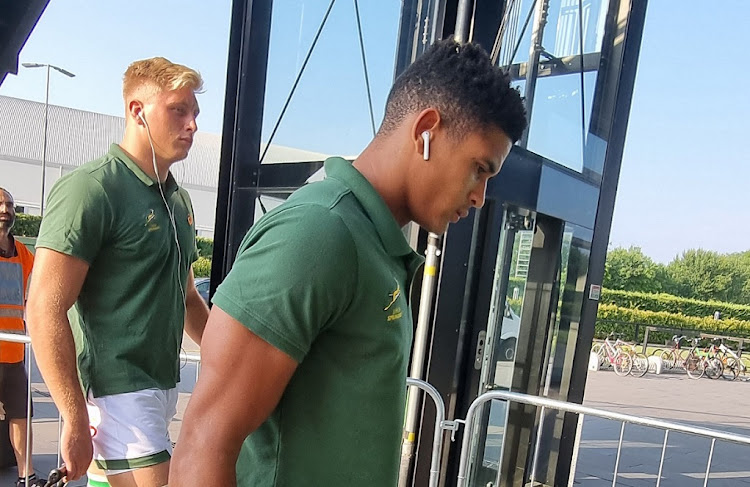 The Junior Boks arrive at Payanini Rugby Centre in Verona, Italy, for their match against Ireland Under-20.
Image: SA Rugby/Twitter

The Junior Springboks took control of their pool at the Under-20 Six Nations Summer Series in Italy when they won their second game on the trot in Verona, Italy on Wednesday evening, beating Ireland by 33-24 in hot and humid conditions.

The conditions at Payanini Rugby Centre made handling difficult, but the SA pack laid the foundation for a solid win against the 2022 Six Nations and Grand Slam champions. The young Boks outscored their opponents by five tries to three, with the final Irish try coming after the hooter had sounded.

With England beating France earlier on the day, the SA U-20s now lead Pool A with a full house of 10 points, followed by the English and French on five points each, while the Irish are yet to open their account.

The Junior Boks dominated the opening half and led 26-3 through four tries and three conversions, while the Irish could only reply with a penalty goal. Ireland hit back with three converted tries in the second half, while the SA U-20s managed one converted try for their second win in a row.

Bafana Nhleko, the Junior Springbok coach, said that while he was happy with the result, he wasn't too pleased with the number of unforced errors.

“Very pleased for the boys because they won against a good side who are the Six Nations U20 champions,” Nhleko said.

“The Irish showed their quality, especially in the second half. It was another great learning opportunity for the boys, and I thought we did well to manage the game despite their persistent pressure.”

The Junior Boks tackle France on Tuesday in their third outing.

Junior Springboks coach Bafana Nhleko has made six changes to his forward pack for Wednesday's second pool match of the Six Nations U20 Summer Series ...
Sport
1 month ago

Everyone had Salmaan Moerat’s attention, but a lumpy throat tried to outdo him.
Sport
1 month ago

As they prepare to take on Ireland in their second match of the Six Nations Under-20 Summer Series in Italy on Wednesday, Junior Springbok coach ...
Sport
1 month ago

Boks look to slowly blood youngsters among the seasoned campaigners