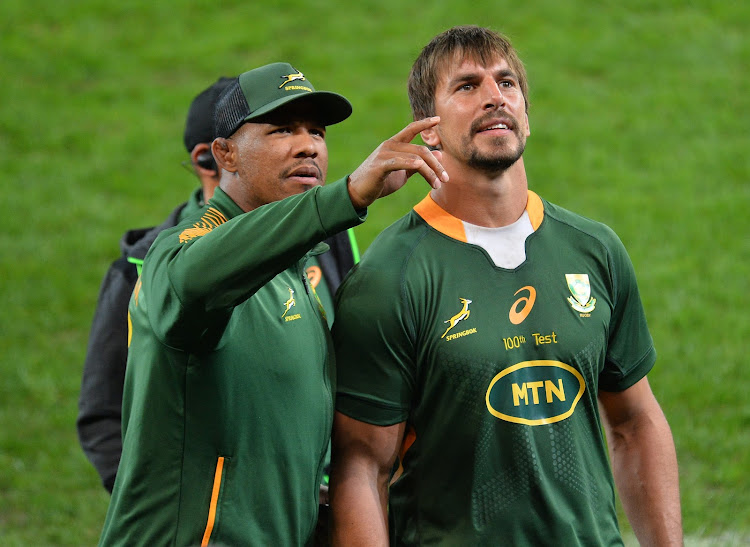 The Springboks are planning to add to the All Blacks' misery, with plans being made to tame the New Zealanders in the opening Rugby Championship game, Springbok lock Marvin Orie says.

Tension is building ahead of the Mbombela clash and the Boks are bracing themselves for a backlash from a New Zealand team reeling after a series defeat against Ireland.

The Boks are in a training camp preparing for back-to-back games against the All Blacks, before embarking on a three-match tour to Australia and Argentina.

“For me to be involved with the national team is obviously a big privilege and an honour,” Orie said.

“There are not many guys who have had the privilege, so I’m just taking it day by day and doing my best to contribute to make the team do well.

“The All Blacks are known to have a strong set piece.

“They have a lot of world-class players, especially in the second row. It will be a good challenge for us.

“Luckily we also have some world-class players and the competition has been good and the preparation has gone well.

“We have spent a lot of time analysing and trying to get plans in place, so it's going to be an exciting challenge.

“The team have had a good week of prep so far and hopefully we can put on a good show next week.”

The beleaguered All Blacks are set to be without lock Brodie Retallick for most of the Rugby Championship after he broke his cheekbone against Ireland.

Retallick left the field during the team's 32-22 loss to Ireland after a head clash with Ireland prop Andrew Porter.

The 31-year-old is expected to be sidelined for up to two months, ruling him out of most of the Rugby Championship clashes.

To compound the All Blacks’ second-row stocks conundrum, Crusaders captain Scott Barrett had to pull out of the third Test with a knee problem after being slated to start at blindside flanker.

Ordinarily Barrett would be the logical replacement for Retallick at lock, but Tupou Vaa’i, who replaced Retallick in the second half in Wellington, is now set to get more game time alongside veteran Sam Whitelock.

The All Blacks added former Blues captain Patrick Tuipulotu to the squad and he got some game-time off the bench in the second Test loss in Dunedin.

He will clearly be part of the mix, but Retallick’s 95-cap experience will be missed.

LIAM DEL CARME | Can the All Blacks foster a performance to help coach keep his job?

As Ian Foster arrives in SA this week with his back against the wall, he could do well to take a leaf out of Jake White’s book
Sport
2 weeks ago

Tu'ungafasi suffered a neck injury in the defeat to Ireland and will remain in New Zealand with injured team mates Retallick, Jack Goodhue and Nepo Laulala.

He will target a return for the home Test against Argentina in Christchurch on August 27.

After the Ireland defeat, All Black coach Ian Foster said: “The only good thing that can come out of this is that we use it as fuel to get better.

“If we don't learn, if we don't use this whole experience of this series to learn and be better, then it is just wasted.

“We've got to pick ourselves up quickly, look at solutions, look at positives and find a way to go forward because if we don't it is wasted,” he said.