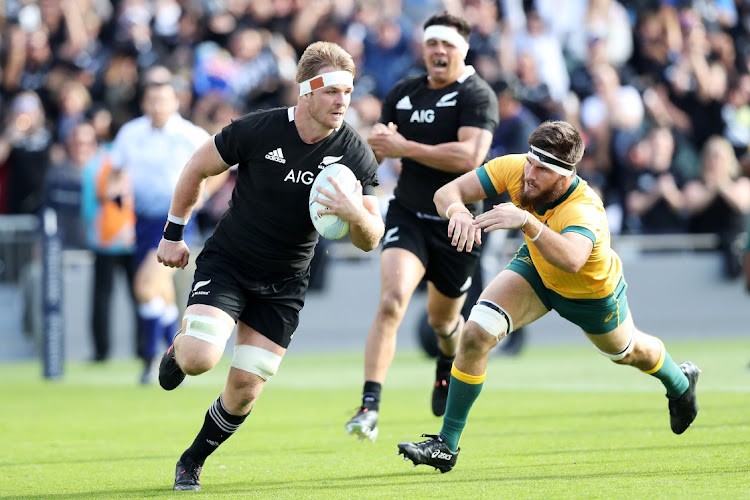 Sam Cane of the All Blacks heads in for a try during the Bledisloe Cup match between the All Blacks and the Wallabies at Eden Park in 2020.
Image: Phil Walter/Getty Images

The oft-used advice about the need to separate the baby from the bath water sprang to mind when All Blacks captain Sam Cane delivered his take on his team's state of readiness before Saturday's Rugby Championship Test against the Springboks in Mbombela.

The skipper believes there is no need to overhaul their personnel, system or strategies in the wake of their run of four defeats from their last five clashes.

Their 2-1 series defeat to Ireland has been the cause of much consternation in New Zealand rugby and their demanding public want to see marked improvement against the team they traditionally measure themselves.

“It may seem like there’s a lot to fix from the outside, but in camp we have some clear focuses and often when you get those big things right a lot of the smaller things that may seem like issues sort themselves out,” said Cane before a team practise.

“It’s important that we don’t focus on all these things going wrong because the truth is there aren’t a whole lot. With top teams it is small margins in games.”

The series against Ireland underscored that the All Blacks are no longer the dominant force they once were. The team that has been the sport's pre-eminent force since the advent of professionalism are displaying vulnerabilities they used to exploit in other teams.

Cane stressed, however, that shortfalls can be dealt with calmly and methodically.

“In the last Test [the decider against Ireland] we lost by 10 points (22-32) but we let them score two rolling maul tries, which for an All Black pack, is something we don’t see as acceptable. Fix that and it is one big thing we have sorted out.”

Cane though, is bracing for the physical onslaught his team will likely face over the next two Tests at Mbombela and Ellis Park. They have not played the Springboks in SA since 2018, when they won through a last-gasp try at Loftus.

“They have an incredible amount of depth in their squad,” he said about the Springboks.

“We know what to expect, a confrontational, physical battle.

“Big men coming around the corner, cleaning hard and then the skill in the midfield and the backs. It’s up there with the best in the world. They are the full package.”

By contrast, his team have several players who have to hit the deck running on their first visit to SA.

“It’s been a long time since we have been here. It is one of the things you took for granted when we were doing it twice a year. There are a few boys who are in SA for the first time,” said Cane.

The Springboks will aim to bring accuracy and intensity to their huge Rugby Championship clash against wounded New Zealand at Mbombela Stadium on ...
Sport
5 days ago

Nienaber explains Bok selection for crunch clash against All Blacks

Springbok coach Jacques Nienaber has explained the three changes he has made for Saturday's Rugby Championship clash against New Zealand at Mbombela ...
Sport
5 days ago

As he prepared for the Rugby Championship clash against New Zealand at Mbombela Stadium on Saturday, Springboks scrumhalf Faf de Klerk remembered his ...
Sport
5 days ago

Malcolm in the middle of Springbok front row

Hooker Malcolm Marx has earned a starting berth on the occasion of his 50th cap when the Springboks play the All Blacks in Mbombela on Saturday.
Sport
6 days ago