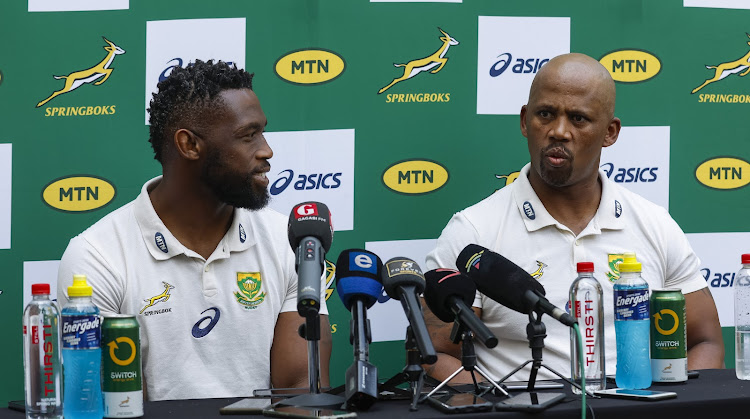 The nagging urge to finally beat New Zealand on SA soil for the first time in eight years is the main motivation for the Springboks ahead their hugely anticipated Rugby Championship showdown at Mbombela Stadium on Saturday.

The last time the Boks beat the All Blacks in SA was in 2014 when Pat Lambie slotted home a 52-metre penalty with a minute to go for a 27-25 result at Ellis Park.

Ahead of the match at the venue where he made his debut in 2013 against Scotland, Springbok captain Siya Kolisi said they want to end the home-losing streak against New Zealand.

“We haven’t won at home against the All Blacks in eight years and that is our motivation this weekend,” he said.

“To be honest with you, we can’t control what’s happening in their camp but we can only control what we can control in our camp and on the field on Saturday.

“As this group, we have never beaten the All Blacks in SA before and that’s what we want to do and that is our motivation. We want to really play very well and get our plans to work properly.”

Kolisi added that New Zealand remain a difficult side to beat despite the fact that they lost their last two matches against Ireland recently at home.

“They are an amazing side and we want to test ourselves against them. They have just lost two games but we have been on the other side too where we were under pressure.

“We know what it feels like to be under pressure, it takes one game for you to kick-start, We are not chilling here thinking what everybody is thinking but we are preparing to win the game.

“Guys are feeling good, it has been a great two weeks of preparation. There is a lot that we had to work on after the series against Wales. We are slowly starting to chip away on all the goals that we set for ourselves, things that we spoke about, and we have to make things better.”

To be able to beat the All Blacks, Kolisi said that they must stay focused for the duration of the match.

“That’s what we have been talking about. The coach Mzwandile Stick talks about the 81st and 82nd minutes. It will probably get to that time because they are not going to stop coming at you.

“They have players in the starting team and on the bench who are game breakers and have the ability to make something out of nothing. We want to make sure that no matter what the score line is, we do what we have planned and if there is an opportunity we take it but making sure that we are alert at all times.”

Stick added that they are focusing on what has been happening in the New Zealand camp.

“We are not going to read too much into what’s happening on the other camp. If you look at their forwards coach, he is someone who has been working with the Crusaders' players and a lot of those players will want to perform for him.

“They have a good working relationship from the Crusaders. There are positives on it but there is also the other side where we don’t expect them to change much.”

The All Blacks will always be the All Blacks, the moment you switch off they will punish you because they are like a heavyweight in boxing with a knockout punch. If you blink, they can put three tries past you. That’s the All Blacks and they are a world class side.”

Bok pivot Pollard calls for 80-minute performance against All Blacks

Handré Pollard has asked for an 80-minute performance from the Springboks in their Rugby Championship clash against the All Blacks at Mbombela ...
Sport
1 week ago

The oft-used advice about the need to separate the baby from the bath water sprang to mind when All Blacks captain Sam Cane delivered his take on his ...
Sport
1 week ago

All Blacks look to spoil the party for Marx and Springboks

Scott Barrett says the Bok hooker is physical and dangerous, but 'hopefully we can make it less memorable on his 50th Test cap'.
Sport
1 week ago

As he prepared for the Rugby Championship clash against New Zealand at Mbombela Stadium on Saturday, Springboks scrumhalf Faf de Klerk remembered his ...
Sport
1 week ago