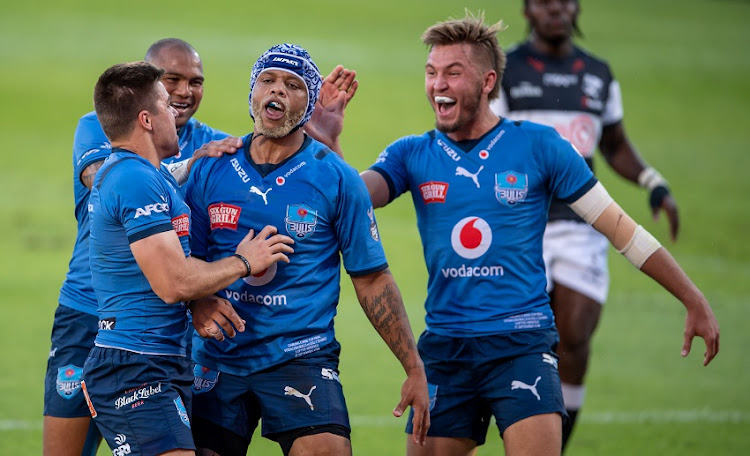 Bulls utility back Lionel Mapoe, in a scrum cap, celebrates with teammates after he scored a try during the Currie Cup final against the Sharks at Loftus Versfeld recently.
Image: Anton Geyser/Gallo Images

South African teams’ terrible start to the new United Rugby Championship has been an eye-opener for the game in the country, leaving the competing sides scrambling to adapt to the weather, referee interpretations and quality of the opposition.

After playing for the last 25 years in Super Rugby against teams from Australia and New Zealand, South Africa’s Bulls, Lions, Sharks and Stormers have embarked on a different path.

They did so in pursuit of a healthier pay-day for South African Rugby and less demanding travel across time zones with player welfare in mind. The competition pits them against the best teams in Wales, Ireland, Scotland and Italy.

But after seven defeats in their opening eight games, many of them by steep margins, there is a realisation of the step up in level from the repetitive domestic competitions they have endured since the start of the COVID-19 pandemic.

“The sides stay disciplined and they don’t rush it,” Stormers prop Neethling Fouche said. “That’s been our learning curve. You have to stay patient and disciplined in how you clean your rucks and the way you present the ball to the scrumhalf.

“They are a bit more polished in that area, whereas we are still learning. They are almost like New Zealand sides, just not as flashy with so many offloads. But they stick to the plan and they wait for you to make a mistake or to give away a penalty.” The Bulls have dominated the South African domestic scene of late but have been well beaten by Irish sides Leinster (31-3) and Connacht (34-7) in their opening two URC matches, the last played in unfamiliar driving wind and rain in Galway.

“We’ve done really well in South Africa, but now we’re in a different environment playing against different opposition and different interpretations of how they see the game being played,” Bulls director of rugby Jake White said.

There have been grumblings about law interpretations from northern hemisphere referees in the opening two weeks, but White believes that should not be used as an excuse.

“We’ve got to adapt. It’s as simple as that. If you’re allowed to hold on to the tackler and go to the ground with him and that’s interpreted as okay, then we can’t moan about it. We’ve got to do the same thing.” The Bulls, Sharks and Stormers in particular will be boosted by the return of their Springbok players when the national team finish their season next month and will also relish getting the European nations back to South Africa under the hot summer sun.

But until then it will likely continue to be a rough ride and an experience they hope will pay dividends down the line.