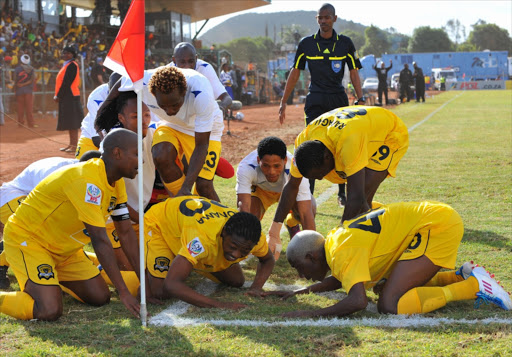 After a 0-0 scoreline in the first leg of the promotion play-off final in Port Elizabeth midweek, the scene was set for Lidoda Duvha (the day will come) to wrap up matters at home in the return leg as they bounced back to top flight football for the first time since being relegated in 2008.

Raymond Manama opened the side’s account in the 28th minute after being afforded space to fashion a shot on the edge of the box.

Captain and fellow midfielder Mongezi Bobe doubled the margin in  the 57th minute with a header from a Tintswalo Tshabalala cross on the left after finding himself unmarked in the box.

Buoyed by a vociferous attendance at the small Vhembe venue, the  Limpopo outfit were quick to get off the block by putting the pressure on the tentative visitors.  An attempted long range shot from wingback Tshabalala needed to palmed away by the agile Modiri Marumo in the United goal.

Both chances were identical headers from crosses on the left flank that rebounded off the woodwork with Marumo beaten.

United, however, were afforded a chance against the run of play when their burly forward Brice Aka managed to turn and fashion a shot that went narrowly wide of goal.

With Leopards leading 1-0 at half-time, it was United who started off more sprightly in search of an equaliser that gave them an opportunity of stealing it because of an away goal rule.

Defender Charles Gallagher powered a free-kick 25 metres out that narrowly missed the target in the opening minutes, while midfielder Eddie Ngalo came close from close range a few moments later.

Leopards were soon in cruise control as Ramagalela and midfielder Khethokwakhe Masuku both had opportunities but their shots went wide.

After an outstanding display in the latter part of the season that include a Nedbank Cup final appearance and a late surge to claim a second spot in the inland stream, they will be the Limpopo side in the elite league next season.

Spare a thought for United, who were crowned champions of the now discarded coastal stream division as they will be forced to fight for another season in the new single streamed First Division.

They also face the unknown of possibly sold.