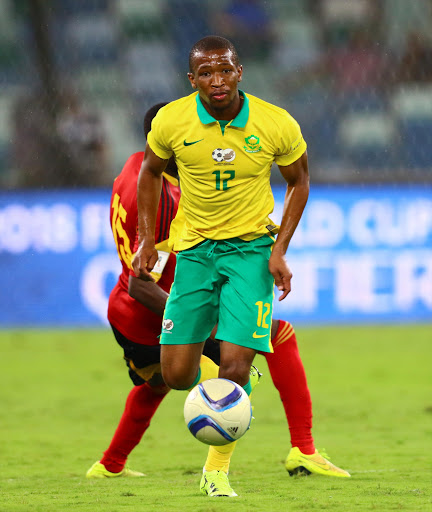 Kamohelo Mokotjo turned in a five-star performance as he helped his Dutch side FC Twente end Ajax Amsterdam’s 20-game unbeaten run on Sunday.

Mokotjo nullified the threat of Ajax dangerman Davy Klaassen with a masterful display in midfield that won him plenty of plaudits and makes a further mockery of his absence from the Bafana Bafana set-up.

Ajax had not lost since August and looked to have secured a draw at least until a late penalty from Mateusz Klich sealed the game for Mokotjo’s Twente.

It was a mixed bag this weekend for other potential Bafana midfielders‚ with Andile Jali not making it off the bench for Belgian side KV Oostende as they played to a 1-1 draw at Gent.

Oostende are three points behind Belgian league leaders Zulte-Waregem just past the halfway mark of the season. Bongani Zungu was out of the match day squad at Portuguese side Vitoria Guimaraes as he still waits for his first minutes in the senior side at the club.

Daylon Claasen played the last 20 minutes for German Bundesliga II side 1860 Munich as they lost 1-0 at Bochum to remain in the relegation mix.

But there was joy for two other recent Bafana stars.

May Mahlangu played the full 90 minutes as his Romanian side Dinamo Bucharest won 1-0 at home to Târgu Mureș.

Mahlangu looks to have finally sealed a starting berth at the club after initially having to be content with cameos as a substitute.

And Lebogong Phiri played for Danish club Brondby as they claimed a 2-1 win over FC Midtjylland to stay in second‚ though they are a full 11 points behind leaders FC Copenhagen.

Sameehg Doutie did play for Indian Super League side Atletico do Kolkata as they came from 2-1 down to beat Mumbai City 3-2 in their play-off semifinal‚ first leg.

SAFA-target Joel Untersee played for Italian Serie B side Brescia in their 0-0 draw with Novara‚ a result that leaves them marooned in mid-table.

Finally‚ Steven Pienaar managed 85 minutes for English Premier League side Sunderland in their 3-0 loss at Swansea and that sees them sink to the foot of the table once more. - TMG Digital