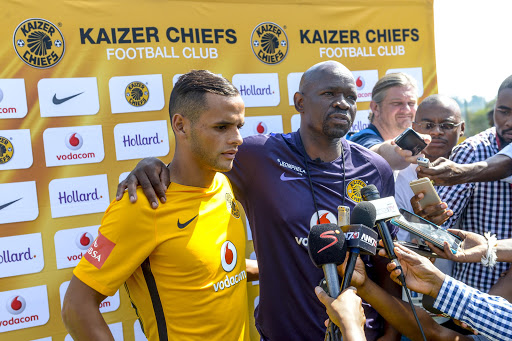 Kaizer Chiefs coach Steve Komphela presented his new striker Gustavo Paez to the media on Thursday‚ but was at pains to stress not too much should be expected of the Venezuelan too quickly.

Paez was presented with the No.28 jersey at Chiefs’ media open day at their Naturena headquarters.

The scoring problems of Chiefs’ strikers have been well documented‚ with the imminent release of two of them – Edward Manqele and Siphelele Mthembu – an indication of that.

However Komphela stressed that Paez was not a quick fix and that Amakhosi's expectant fans needed to give the Venezuelan time to adjust to the club and to SA football.

“I hope everything works well for you‚” Komphela said to Paez.

To the press‚ the coach added a word of caution: “But he’s not the answer. He’s just part of the solution in goal-scoring.

“Because sometimes we put a heavy weight on these players saying‚ ‘He’s the answer’.

“There are no answers in football‚ only solutions.”

Chiefs have not done badly on the scoring charts in 2016-17‚ where their 18 goals are joint-third along with five other teams also on that number.

But their top scorers are defender Lorenzo Gordinho and winger George Lebese with three goals apiece‚ and the club are of the belief that had their strikers not misfired they could be sitting in better than fourth place in the Premier League going into the second half of the season.

Paez‚ who travels on an Italian passport – apparently quick and confident in front of goal – is seen as a potential solution to that weakness‚ given time.

“I’m very happy to be here‚” the striker said.

“It’s like the coach says‚ it’s not an answer but I will try to give my best for the team and all the players.”

Chiefs resume from the Christmas and Africa Cup of Nations break with their league match against Free State Stars at FNB Stadium on Tuesday.

Komphela said Paez will be available for that match.