Sangweni hasn't given up hope of returning to Bafana Bafana 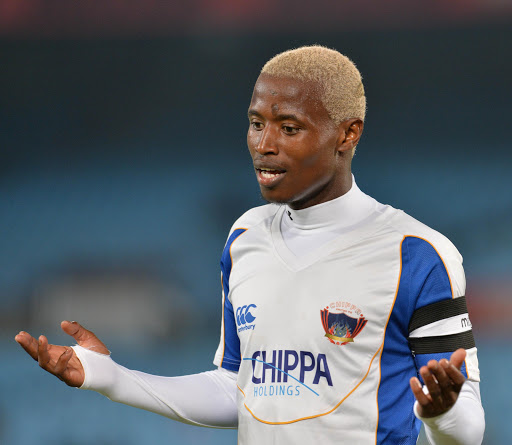 To many football observers in the country‚ Chippa United midfield strongman Thamsanqa Sangweni has not fully unleashed his true and undoubted potential.

Since he made his debut for AmaZulu almost ten years ago‚ the 27 year-old Sangweni‚ who is the captain at United‚ has often flattered to deceive.

The players himself agreed that his career should have reached dizzier heights as he reflected on a career that has also taken him to Sundowns‚ a club that was expected to launch him into a complete midfield general.

“I won’t say I am happy or not about my career so far‚ it is one of those feelings that are difficult to explain‚" Sangweni said.

"My focus at the moment is to continue working hard and helping my team to get results.

"The rest will take care of itself.

“At Sundowns I learned a lot of things and I want to thank them for the opportunity they gave me at the time.

"I did not stay as long as I would have liked but it is one of those things that happen in football and I have moved on with my career.

"I am at Chippa United now where I am working every day to improve my game‚” he said.

Though they have not been consistent with producing results‚ United are one of the teams that have captured the imagination of the fans with their free-flowing and attacking football under the guidance of coach Dan Malesela.

“This is my first time working with coach Dan (Malesela)‚ he is knowledgeable about football and he wants us to work hard‚ appreciate the ball more and go forward with the combinations.

"We have a group of players who have been together for a while and we understand the type of football he wants us to play.

"Sometimes the results don’t come as we expect but we are a group of players who will do anything to play for our coach and represent the club well.

"We want to finish in a good position inside the top eight.”

Sangweni‚ who is the brother of retired former Orlando Pirates defender Siyabonga‚ said he has not given up hope of returning to Bafana Bafana where he has only featured in two matches so far.

“My dream as a youngster was to play in the PSL‚" he said.

"I have achieved that by playing for AmaZulu‚ Sundowns and Chippa United.

"My other aim was to play for the national team and become one of the best in the country in my position."

His mission of cementing a place in the national team is not going to be an easy one as he competes for a place with the likes of Dean Furman of SuperSport United and Oupa Manyisa of Pirates.

“There is always a challenge everywhere and I am ready to compete with any player at any level.

"If I am picked for the national team‚ I will go there and work hard at training to impress the coach‚ that’s the only thing I can do‚” he concluded.