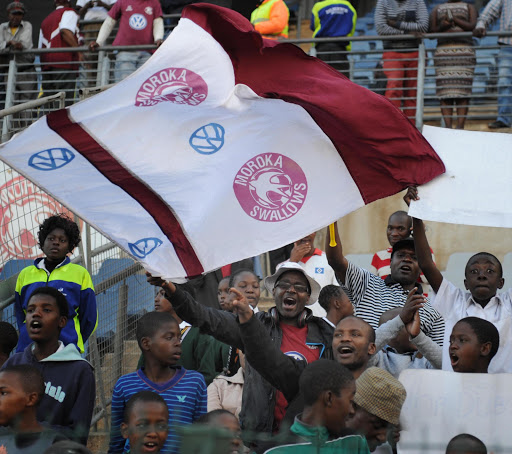 A file photo of Moroka Swallows fans in full song during the Absa Premiership match against Bloemfontein Celtic at Dobsonville Stadium on May 09, 2015 in Dobsonville, South Africa.
Image: Lee Warren/Gallo Images

Like a drunk at a party‚ Moroka Swallows staggered into the uncertain world of fourth division having overstayed their welcome and bored everyone witless following relegation to the amateur ranks.

A 2-1 defeat by Orange Vaal Professionals in their last match of the Gauteng ABC Motsepe League at Qedilizwe Stadium on Saturday delivered the endgame for the once mighty Dube Birds who departed with barely a flicker of resistance.

On their way out of semi-professional football to the hugely disorganised amateur ranks of SAB Regional League‚ there was no arguing at the exit door as the grand old lady of South African football fetched their coat in shame.

As they departed with their 70 year old rich history‚ it was difficult to imagine if they will ever come back and if it was the end for this once strong brand that once took its place on the pantheon of South African football.

On the other hand‚ Swallows’ relegation comes as no surprise as they have been besieged by internal strive for many years which resulted in them relegated from the Premier Soccer League (PSL) at the end of the 2014/ 2015 season.

That was followed by another relegation from the National First Division (NFD) to the ABC Motsepe League last year and they have now been relegated to Safa Regional League.

Swallows went into their last match of the season having played 29 matches where they accumulated 24 points from five wins‚ nine draws‚ 15 losses and needing victory to have any chance of staying in the ABC Motsepe League.

Swallows‚ which has produced many household names since its formation in 1947‚ find themselves in this undesirable situation as a result of many years of poor administration.

They were followed by a generation that boasted the likes of the late Jacob Lekgetho and Jaconia “The Bull” Cibi‚ Steve “Chippa” Lekoelea‚ Peter “Big Six” Rabolele‚ Patrick Ningiza and Scara Ngobese.

Swallows‚ who finished second place in the Absa Premiership and won the MTN8 trophy in 2012‚ continued to produce quality players in the latter years of its existence in South African football.