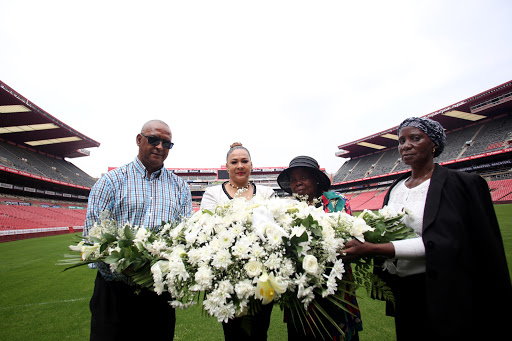 Families of those who lost their loved ones during the Ellis Park Stadium stampede commemorates two of the 43 people who lost their lives on that fateful day in 11 April 2001.
Image: Masi Losi

Tuesday marked the 16th year since the Ellis Park Stadium tragedy but a day that should be acknowledged as one of the darkest hours in South African sport once again went by almost unnoticed.

The response to April 11 has become increasingly muted with each passing year and the families of the 43 fans who lost their lives in a stampede triggered by huge crowds at a league match between Orlando Pirates and Kaizer Chiefs at Ellis Park Stadium in 2001 would be forgiven if the day leaves them with a bitter taste in the month.

Former Premier Soccer League (PSL) CEO Robin Petersen‚ who was the League’s boss at the time of the tragedy‚ told Times Media Digital on Tuesday that the disaster remains one of the lowest points of his professional career.

‘‘For five years every year we did a commemoration but then the two clubs took the decision (not to continue the annual commemorations)‚” he said.

‘‘At that stage I was no longer part of the football structures. The decision was they would not continue the annual commemorations.

‘‘I am not sure what the reasons were but I was not part of that decision.”

Chiefs players and technical team held a moment of silence after their training session on Tuesday morning.

“It is one of the saddest days in South African football‚” said Chiefs chairman Kaizer Motaung.

“It is a fateful day where supporters lost their lives for the love of soccer and their favourite teams.”

Petersen‚ who is now the South African Football Association (Safa) Development Agency chief executive‚ said a lot more can be done to remember the day.

Looking back to that fateful day 16 years ago‚ Petersen said the memories will forever be etched in his memory.

‘‘What I remember about the day is that it was probably the most shocking day of my life‚” he said.

‘‘It started off incredibly well. We had a board of governor’s meeting at Sunnyside Park Hotel and we had arranged a suite for all the board members.

‘‘It was a very positive meeting and we had a lot of plans for the progress of the league.

‘‘I left to go to the stadium and I was very surprised that it took over an hour and a half from the Sunnyside Park Hotel to Ellis Park.

‘‘And then I got there and saw the complete chaos outside and it was then that I recognised that something bad was happening.

‘‘I went around trying to sort things outside. When I got in it was already 20 minutes into the games and two goals had already been scored. (The score was 1-1)”

Petersen was told there was trouble in the corner inside the stadium and he went to investigate.

‘‘I went down to the field and saw people behind the poles who were already dead‚” he said.

‘‘The game was still continuing so I ran to the touchline and told the referee we had to stop the game. I ran onto the field and stopped the game.

‘‘Then we had to deal with the reality of what had just happened.”

“Such events always refresh our humility before the Almighty‚ whose ever presence carries us through the good and the dark days‚” said Motaung.

‘This indeed was one of the darkest days and we will never ever forget that.”