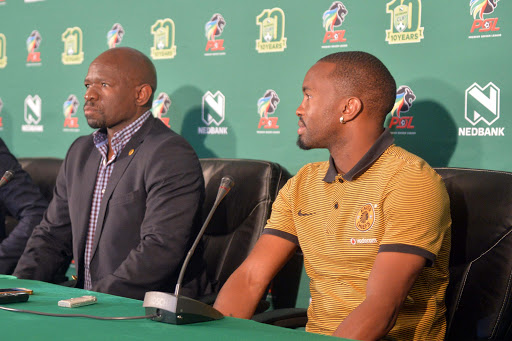 Steve Komphela is wary of a SuperSport United on the rebound and whose coach‚ Stuart Baxter‚ thrives on challenges‚ the Kaizer Chiefs coach said ahead of his side’s Nedbank Cup quarterfinal against Matsatsantsa.

Chiefs‚ on a high after four wins in a row‚ and 12 league games without a defeat‚ meet a SuperSport at FNB Stadium on Saturday (6pm) who have suffered demoralising‚ back-to-back league defeats against Mamelodi Sundowns‚ 5-0 on Thursday and 1-0 on Wednesday night.

Komphela‚ once Baxter’s assistant at Bafana Bafana‚ said the SuperSport coach has the ability to come up with a plan to get results when his teams face adversity.

He pointed to Wednesday’s result against Sundowns – a defeat‚ but one where SuperSport improved dramatically from their thrashing the previous week – as evidence of Baxter’s ability to bounce back.

“You’ve got to be careful with a team who are not getting results‚ and they know what is expected of them‚ and be wary of how dangerous they can be‚” Komphela cautioned on Thursday.

“And with regards to Stuart – he’s very experienced. He has shown it in the past.

“I mean‚ the two matches he played against Sundowns‚ from the first one to the second‚ were not the same.

“And that is a sign of a man who thinks. You learn from your previous experiences.

“In football you always learn.

"And if he has to think about the previous match he lost‚ and the way SuperSport played on Tuesday night‚ then there’s a possibility he might have a different way of seeing the match he’s going to bring on Saturday.

“Which obviously says to you‚ don’t depend on his past‚ because he’s going to come up with a different way of thinking – so you have to think even further.

“So you have to respect the quality that SuperSport have and Baxter’s thinking capabilities.

“There are certain people who thrive on challenges. The more you throw at them‚ the sharper they get. And Stuart is that kind of breed.”

Chiefs’ four wins in a row started with a 2-1 home league victory against Mamelodi Sundowns followed by a 2-1 away win against ABC Motsepe League Acornbush United in Nelspruit.

Amakhosi then beat Bloemfontein Celtic 2-0 away in the league‚ then Chippa United 1-0 at FNB on Saturday.