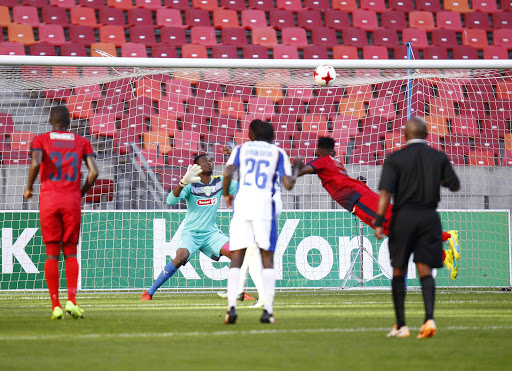 Lerato Manzini’s goal poaching ability proved decisive at the Nelson Mandela Bay Stadium on Saturday as he scored the only goal of the game to put Chippa United into their first cup semifinal.

Manzini headed home in the 72nd minute with his only real opportunity of the quarter-final tie to see off a gallant Jomo Cosmos, the only lower league team left in the Nedbank Cup.

The striker had a tough afternoon trying to get the better of Cosmos’ tight defence and did what all good strikers do --- took his lone chance, heading home a cross from Paseka Mako in one of the few chances for the Chilli Boyz.

Chippa, badly hampered by injuries, looked to use the game to give opportunity to fringe players with priority given to Tuesday league match at home to Maritzburg United where they will attempt to end a run of nine league games without success and haul themselves away from relegation danger.

In the first half, Dan Malelsela’s makeshift side failed to achieve the combinations he was looking for, having the majority of possession but circulating the ball in a languid fashion and being effectively pressed by Cosmos.

Jomo Sono’s side were happy to sit back and allow their opponents the ball and then try and catch them on the counter which they almost did two minutes before the break with a series of slick and swift passes that was spoiled by a heavy touch, at the decisive moment, from Linda Mntambo that allowed Chippa goalkeeper Zama Dlamini to come out and smother the ball.

The goal came after some good work by substitute Phetolo Sekome, who livened things up for his team after coming on. A good first touch allowed Mako to provide the cross and Manzini to head home.

Cosmos kept trying right up to the end but did not have the quality needed to break down Chippa but Jomo Sono can now turn his attention to trying to win a promotion play-off place and get out of the National First Division again.

“We need to transfer this result into the league now,” said Malesela after the game.

“We gave a good account of ourselves, I’m proud of my boys,” added Sono. “This might encourage my players now for the last eight games of the league.”

Musa Bilankulu headed home from a corner in the 40th minute to score the winner that put the KwaZulu-Natal side into the semifinals.