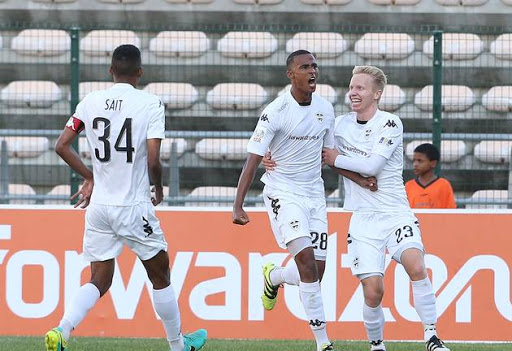 The race to the Absa Premiership next season remains wide open after Black Leopards and Stellenbosch FC played to a lively goalless draw during their relegation/promotion playoff match at Thohoyandou Stadium on Saturday.

Stellenbosch sit top of the mini league with two points from as many matches and Baroka FC and Leopards are tied on one point each after having featured in one match so far.

The picture of which team will be promoted to the top flight will possibly become clearer this week as Baroka are up against Leopards in the Limpopo derby at the Peter Mokaba Stadium in Polokwane on Wednesday.

The winner of this potentially explosive derby match will move to four points with two matches remaining.

On Saturday, Stellenbosch will continue their push for promotion in the return match against Baroka whom they held to a 2-2 draw on the opening match of the playoffs last Wednesday in Cape Town.

Early on in the match, Stellenbosch went the aerial route where their wingers played crosses into the box to target man Mame Niang who was a constant threat to the Leopards defence in the air.

On the hour mark, Stellenbosch goalkeeper Washinton Arubi produced an excellent save to deny Leopards striker Mwape Musonda who unleashed a powerful shot from close range.

Leopards, who were buoyed by a partisan and packed Thohoyandou Stadium crowd, created most of the opening chances but they were let down by wrong decisions when they arrived in the Stellenbosch half.

Most of Leopards’ attacks were created by creative midfielder Siphelele Ntshangase and Lebohang Mabotja who dictated terms from the middle of park.

The early stages of the second half continued in the vein as before the break with few chances like in the 55th minute when Musonda’s header flew over the crossbar from a cross.

Leopards were unlucky not to open the scoring just before the hour mark when a close range effort by Ivan Mahangwahaya ricocheted off the cross bar with Arubi beaten.

Leopards were the most dangerous team in the last ten minutes but Ntshangase failed to find the target from a free kick just outside the box and their persistent appeals for a hand ball fell on deaf ears.