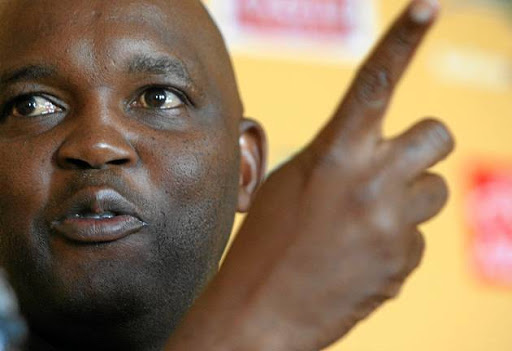 Pitso 'Jinges' Mosimane is not concerning himself with taking over at Bafana Bafana. He is at ease managing Mamelodi Sundowns.
Image: SYDNEY SESHIBEDI

He was at the receiving end of several salvos from Mosimane‚ who tried to keep the banter light‚ but could not hide an underlying frustration.

Mosimane admitted that Soumahoro Bangaly’s reckless late challenge that led to the 90th-minute penalty that Yassine Khenissi scored the winner from was not clever.

He felt Downs displayed a quickness that Esperance struggled to cope with‚ and said a string of injuries – including Hlompo Kekana‚ Khama Billiat‚ Ricardo Nascimento and Anthony Laffor – affected the Brazilians’ chances of a home win.

“Then you only wish you have your (full) team to play. This team we can beat. Even in Tunis‚ we can beat this team – I believe so‚” Mosimane said.

At that point the Downs coach started one of several verbal sparring matches with Najjar.

“I see you laugh‚ huh – we are the champions‚” Mosimane said‚ cutting off Najjar‚ who was trying to say: “I think it will be difficult. If you cannot win here‚ you cannot win in Tunisia‚ I think.”

To which Mosimane responded‚ “I have been to Kinshasa (where Downs beat AS Vita 3-1 on May 24). I have to remind you – three goals‚ OK?”

Najjar responded: “We have also beaten Vita with three goals (3-1 in Tunis on May 12).”

Mosimane queried: “Where‚ at home?”

To which Mosimane responded: “Yeah‚ go (play) away.”

Najjar‚ looking increasingly bewildered‚ said: “We will go. But we will make the same result as Sundowns.”

Mosimane could not stop himself‚ saying: “OK – you win my friend. It’s OK‚ I understand the mentality in North Africa – it’s the same mentality as you have.

“It’s OK‚ you win‚ you can make a mockery out of it – it’s fine. But if I had a full team‚ you can never come out of Pretoria.”

Even then‚ as the mike was turned over to Najjar‚ Mosimane landed one last blow‚ saying: “Now let’s listen to you – keep boasting hey. Let’s hear you now.

Mosimane was also not pleased‚ quite justifiably that Downs were not allowed by the Confederation of African Football (Caf) to play the game at 3pm.

It has been the coach’s policy in home games – such as last year’s final against Zamalek – to maximise home advantage by trying to play at a different time to what the opposition are accustomed too.

“Because they (Esperance) play at night‚ and they are in the period of Ramadan‚ and it’s our advantage – we have to use it.

“The sun sets earlier in winter in South Africa‚ so they’ve got that three hours to eat and play at 8pm.

“It’s the first time I’ve heard Caf tell us what time to play.”

Caf‚ based in Cairo‚ have been known to favour North African teams on such small‚ though not unimportant‚ advantages or disadvantages.

The verbal exchange might result in a fiery encounter in Downs’ next Champions League game against Esperance in Tunis on June 21.