It is always tough to get a result in Nigeria for any visiting side‚ not least a South African selection that has never won there before. 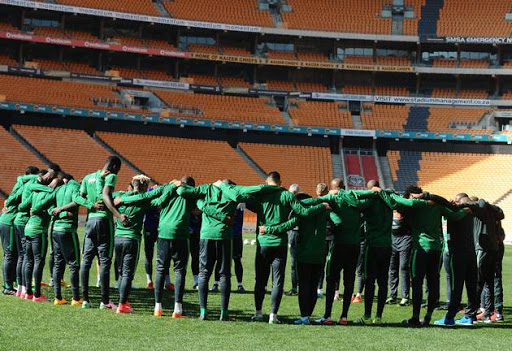 But Bafana Bafana‚ who depart on Wednesday for Uyo and have a weekend clash with the Super Eagles at the start of the 2019 Africa Cup of Nations qualifiers‚ can draw inspiration from several top class away performances in qualifying competition in the past where the national team has risen to the challenge‚ including their last game in the populous West African country.

Here are five top class performances in the past that proved South Africa can overcome great odds to produce an unexpectedly positive result:

South Africa’s daunting away trip to Nigeria on Saturday will be their 50th Africa Cup of Nations qualifier since they first entered the ...
Sport
5 years ago

The tragic death of spectators trampled as they fled in terror after callous police fired teargas at the stadium exits will always detract from the 2-0 win that South Africa achieved against a powerful Zimbabwe side at the National Sports Stadium in Harare in a 2002 World Cup qualifier.

Delron Buckley’s early goal stunned the home side‚ who had the likes of Peter Ndlovu‚ Benjani Mwarurwari‚ the Mugeyi twins and Kaitano Tembo in their line-up‚ and when they got a second with eight minutes left it proved the superiority of the Bafana side.

Unfortunately‚ the celebrations of the South African players proved provocative and were met by a hail of missiles from the irritated home fans.

Police then responded with teargas which saw the game abandoned but the result later verified by FIFA.

Under caretaker coach Pitso Mosimane‚ keeping the bench warm for Carlos Alberto Parreira‚ South Africa had made a disappointing start to the 2008 Nations Cup qualifiers by drawing 0-0 with Congo at Soccer City.

In their second game away at the Independence Stadium‚ they were given little chance as Zambia had a long-standing unbeaten record at the venue.

Bafana Bafana have not found West Africa a happy hunting ground in the past‚ but can point to some recent success in the region as they prepare to ...
Sport
5 years ago

Mosimane had Gavin Hunt along for the game as an advisor and Parreira came to watch too.

This was the botched qualifying campaign for the 2012 finals.

Both Bafana and Egypt were embarrassingly upstaged by minnows Niger and Sierra Leone and Mosimane got the permutations wrong and duffed qualification.

Talking about the huge strides Bongani Zungu has made in Portugal in such a short time embarrasses him.Zungu is quick to state that he hasn't done ...
Sport
5 years ago

But the games against the Egyptians proved a feather in the cap of the beleaguered coach‚ even if the game at Ellis Park versus the Pharaohs three months earlier was a hair raising affair for Bafana and they were most fortunate to snatch a last minute winner through Katlego Mphela.

But the return in Cairo saw the side superbly organised and defensively sound and to Egypt’s frustration there was no way past the defence of Khune‚ Ngconcga‚ Masilela‚ Sangweni and Gould.

With the draw‚ Egypt were out while South Africa just needed two points from the last two games against Niger and Sierra Leone.

Shakes Mashaba’s first game back was a delight for a small band of traveling fans in searing heat as Sibusiso Vilakazi came off the bench to emerge the hero with two goals in a 3-0 away triumph.

The win began the march to the 2015 Nations Cup finals.

Sudan looked strong in the first half but their defence‚ and goalkeeper in particular‚ went to seed after the break as Vilakazi‚ who replaced ineffective debutant Keegan Dolly‚ reacted quickest to stick away Thulani Hlatshwayo’s header from a corner.

Vilakazi followed it with a brilliant feint and shot to settle the result after an hour. Bongani Ndulula got the third after Thabo Matlaba’s efforts on the left.

Tokelo Rantie was on fire as he squandered an early chance but then broke down the left to score just before half-time and give South Africa an unlikely lead.

Three minutes into the second half it was 2-0 as Rantie out muscled the defence and weaved through for another.

But Nigeria pulled one back through Sone Aluko‚ then saw Reneilwe Letsholonyane got sent off‚ and right at the end beat a poorly-positioned Darren Keet with a low drive to equalise.

The 2-2 draw‚ however‚ eliminated Nigeria and cost Samson Siasia his job as coach.