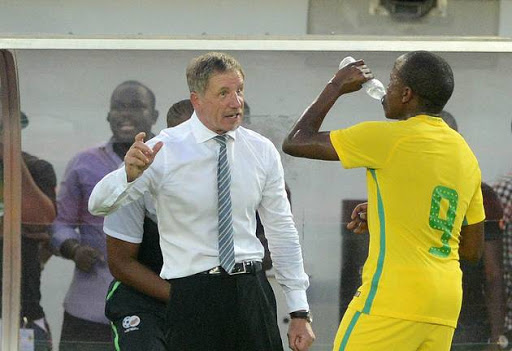 Bafana Bafana coach Stuart Baxter knows what an impact his spectacular opening result - a first-ever competitive win against Nigeria - can have on his second tenure with the national team.

There was more than a little public scepticism over Baxter's return a month ago to replace Ephraim "Shakes" Mashaba.

The public wanted to know why Bidvest Wits' new league-winner Gavin Hunt had been overlooked.

Safa had been in talks with Carlos Queiroz and Herve Renard‚ but failed or declined to land them.

Baxter knows how much sway Saturday's inspired 2-0 2019 Africa Cup of Nations qualifying victory in Uyo can earn him back home.

Never mind the buy-in from his players‚ who had already reacted so well to Baxter's gameplan‚ research of the opposition and tailor-made training sessions.

Asked how he felt afterwards‚ Baxter said: "Delighted. I think‚ for many reasons. But I think the main reason is because we know the impact this will have back home.

"I've never had so many text messages after a game. I mean‚ I started scrolling‚ and it just went on. I think there are about 50‚ and I don't know how I'm going to answer them all - I think I'll be up until midnight trying to.

"But I think that's a reflection of how important it was to so many people.

"And the players have been magnificent. Because I've come in at such short notice. It's been compromised preparations.

"We've had injury scares left‚ right and centre. We had to back off one of the trainings (on arrival in Uyo on Thursday) because the trip was too long and arduous.

"But it just felt that after about 20 minutes the crowd went down‚ Nigeria started making mistakes‚ and we opened the pitch better. And once we started opening the pitch‚ then we started getting our players on the ball‚ doing things on the ball.

"Once the defending led to attacking play‚ I thought we dominated the game. We hit the post twice.

"The other reason I'm delighted is that you know that if you have a disappointing result‚ then straight away people are saying‚ 'Ah well‚ you see. He's good at club level but he's failing again'.

Baxter had ticked just about every box in his preparations since being appointed just over a month ago.

He called Hunt for advice on his squad. He roped in a Manchester United scout to monitor Nigeria's three-week camp and two friendlies in France‚ and the coach gathered his own intelligence on the Super Eagles.

Baxter had training sessions suited to his gameplan.

In the first half‚ Bafana struggled with cohesion‚ especially early against a fired-up Nigeria. Even then‚ the tactic of knocking the ball up to Tokelo Rantie to run at the Eagles‚ or hold it up‚ worked decently and helped carry SA to the break goalless.

"You guys (the media) have watched us train‚ you've heard what we've said and seen what we've done. And I think that preparation led to a result‚" Baxter said.

"If we had drawn 1-1‚ or had a narrow defeat‚ it wouldn't have been any worse work than what the players have put in.

"And that's what you've got to do every time. Tick as many boxes as you can‚ and then the chance is higher that you're going to succeed."

With Libya having beaten Seychelles 5-1‚ Bafana are in second in Group E on goal difference.