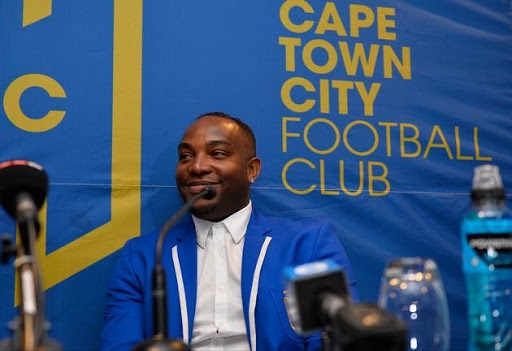 Benni McCarthy was unveiled‚ to the strains of his hit song Shibobo with kwaito group TKZee‚ as the new Cape Town City coach on Tuesday as chairman John Comitis moved quickly to fill the avoid left by Eric Tinkler’s departure to Supersport United.

“I’m overwhelmed by the reception and the media turn out‚" McCarthy told a packed press conference at a city hotel.

"I’m grateful and appreciative for the chance and I have to thank both the chairman and the club that they have shown this faith in me and that they think I’m the right guy to achieve.

"I hope I can replay their faith by working hard‚” he told a packed press conference at a city hotel.

McCarthy‚ who turns 40 in November‚ moved quickly to address his coaching inexperience.

“It is my first job and Cape Town City is gambling on me.

"But I know what I have to do to achieve and succeed and hopefully I’ll prove that my appointment is a good one.

"I’ve set targets for myself and the club.

"Cape Town City finishing third in the league last season was incredible but I hope that the players want to go a step better.

"Now we can even go up one more … maybe second or even challenge for the league.

“I think I taking over an ambitious group of guys.”

McCarthy said he wanted to have a harmonious group.

“I want a team that is together. I want players to feel comfortable‚ to be able to trust me like I trust them. I won’t be making drastic changes because they had success and now it is just to add on.”

As to his tactical approach‚ McCarthy said South African teams were not vicious enough in front of goal and this is what we wanted from his side.

“I want us to be dominating games‚ having ball possession and tiring the opponent.

"The club last season sucked in opponents and caught them with counters‚ that is already a missile in our armoury.

"I want to go toe-to-toe with Chiefs‚ Sundowns and Pirates‚ team that are really comfortable on the ball. But sometimes we will have to win ugly too."

Comitis said he felt McCarthy would bring a dimension that no other coach in South African football has.

“He has played at the very top and I think I found in him someone who relates to me in ambition.

"We will not him stumble; there is a whole team around him. We want him to be Benni and he can give us what no one else can.”

McCarthy will start work on June 23‚ one week before his squad returns for pre-season training.