Mwape Musonda netted two first half goals to hand Black Leopards a potential ticket back to the top flight as they beat Stellenbosch FC 3-1 at the Athlone Stadium on Wednesday. 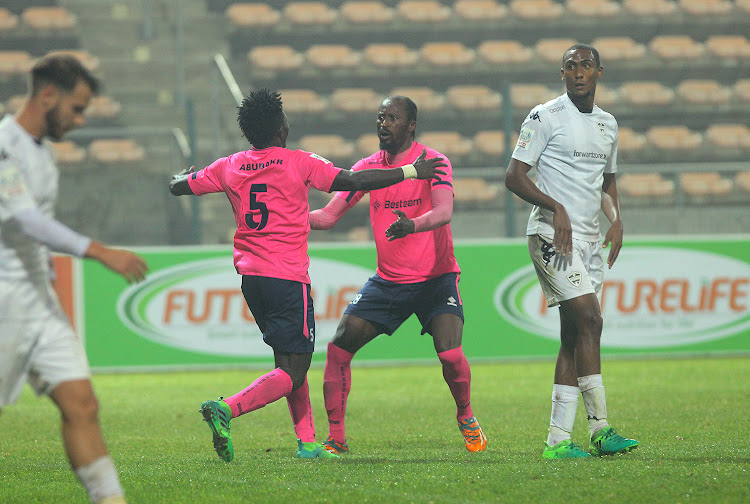 Mumuni Abubaker got the other goal in Leopards’ first victory in the Premier Soccer League’s post-season promotion relegation play-off games.But a bizarre goal for the vanquished Cape club, who were already eliminated from the race, means Leopards must still beat Baroka by two goals in the last of the six-match programme in Thohoyandou on Saturday to return to the top flight for the first time since 2013.

Leopards were full value for a two-goal lead at half-time and looking to extend their lead after the break, and improve their goal difference ,when Petrus Shitembi pulled one back for Stellenbosch in the 65th minute.Leopards had sportingly kicked the ball out into touch to allow for treatment for Stellenbosch midfielder Tauriq Dien who was struggling with cramps.

As protocol dictates, Stellenbosch kicked the ball back to Leopards with a long hoof up field by Shitembi but Leopards’ goalkeeper Rotshidzwa Muleka slipped as the ball head towards him and it bounced over him and into the net.It was a horror error that could yet stymie their promotion hopes.Leopards, who had to win to stay alive in the promotion contest, had three strikers in a 3-4-3 line-up from the start against a Stellenbosch side where coach Sammy Troughton was giving a run to some of his fringe players.But it took almost 40 minutes for Lidoda Duvha to break the deadlock when Abubaker’s thunderous shot was parried by home ‘keeper Edward More only for Musonda to sweep through and pocket the rebound.In stoppage time at the end of the first half the Zambian striker doubled the tally after a horror error at the back with as simple tap after skipper Siphelele Ntshangase had won possession.Stellenbosch brought on Mame Niang on for the second half to try and make a game of it and Matthew Rowell’s header forced Muleka to make a one handed save.But Abubaker’s header in the 69th minute from a corner re-established the two goal lead while complaining off the bench saw Jason Skippers, who had gone off at half-time, handed a red card for verbal abuse.

Leopards came close to a fourth goal in stoppage time when Marks Munyai hammered a free kick against the crossbar with virtually the last shot of the game.Leopards now have four points, three behind Baroka who sit at the top of the table. Leopards’ goal difference is plus one while Baroka are on plus three.