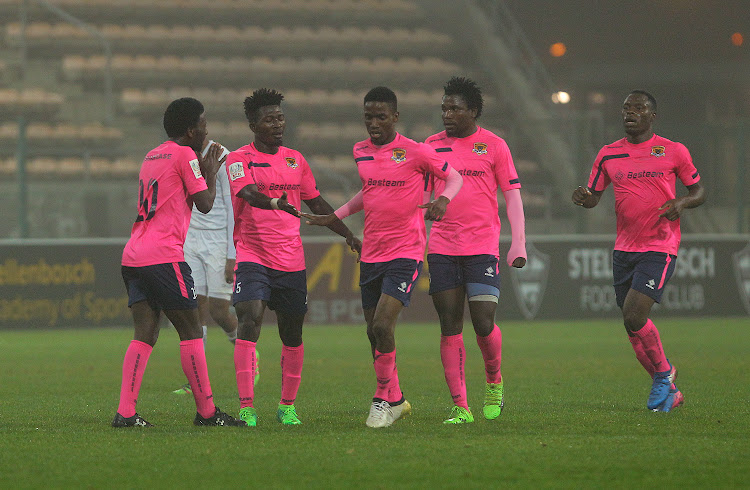 Black Leopards’ biggest impediment to beating Limpopo rivals Baroka FC‚ and securing a return to the Premier Soccer League‚ will be an exhausting day of travel from the one side of the country to the other‚ said coach Jean Francois Losciuto.

The Belgian added that a lack of time to rest before Saturday’s final‚ and decisive‚ game in the end of season promotion-relegation play-offs was another factor counting against Leopards.

National First Division second-placed finishers Lidoda Duvha spent the whole of Thursday on the road after their 3-1 win over third-placed playoff qualifiers Stellenbosch FC at the Athlone Stadium in Cape Town on Wednesday night.

Mwape Musonda netted two first half goals to hand Black Leopards a potential ticket back to the top flight as they beat Stellenbosch FC 3-1 at the ...

It was their first victory of the six-match series but means that they will be promoted if they beat Polokwane-based second-last PSL finishers Baroka by two goals in Thohoyandou on Saturday.

Leopards departed from Cape Town by air at midday and then spent the rest of the day on a potentially exhausting bus journey from OR Tambo Airport to Venda.

“The most important thing is just recuperation and massages. We won’t have any time for training but at this stage of the season it is not really necessary. We just need to make sure the players are properly rested‚” Losciuto said.

Leopards are at an obvious disadvantage having played the midweek match plus then having to travel back home while Baroka have had a full week to prepare after last Saturday’s home win over Stellenbosch.

The race to the Absa Premiership next season remains wide open after Black Leopards and Stellenbosch FC played to a lively goalless draw during their ...
Sport
4 years ago

But Losciuto said his side would seek to overcome any handicap and build on a good victory on Wednesday.

“I was very happy with the spirit on the pitch. We played very offensive football and we scored though I was disappointed about the goal that Stellenbosch scored‚” he said.

“But mistakes happen in football. Now we need to win 2-0 against Baroka on Saturday.”

It could have been just a single-goal target for Saturday had Leopards’ goalkeeper Rotshidzwa Muleka not slipped as the ball was kicked back towards him as Stellenbosch returned possession to Leopards after they had kicked it out to allow treatment for one of the home team’s players.

It was a blooper that is likely to go viral over the next days.

“Each game we have had a story with the goals we have conceded. But more important for us is to prepare properly for Baroka. All is possible in life‚” Losciuto said.

Chelsea will open the defence of their Premier League title at home to Burnley when the season kicks off on the weekend of August 12-13.The full list ...
Sport
4 years ago

“I asked the players after we were 2-0 up a half time to try and get a three-goal advantage because then we would only have to beat Baroka by one. That would have been much easier than having to score two.”

Leopards were last in the top-flight in 2013 when they finished last in the PSL standings and were relegated to the NFD.