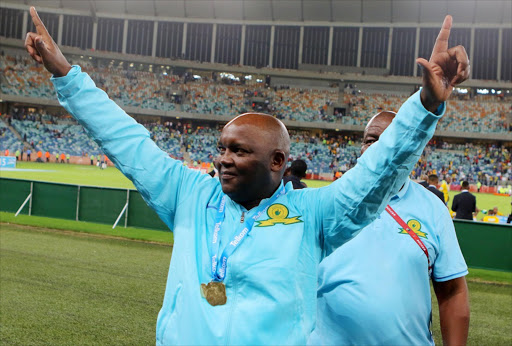 Mamelodi Sundowns will be hoping for better luck and a more disciplined defensive performance when they take on Tunisian side Esperance in the African Champions League on Wednesday.

Sundowns became the first South African side to play 100 African club competition matches when they were defeated 2-1 by Esperance at home on June 4.

But it proved an unhappy occasion as they slipped to a first ever home loss that now puts their quarterfinal participation in peril.

It was still a major milestone for the current Champions League holders‚ who are ahead of Orlando Pirates (95 matches) as the South African club to have played in the most continental games‚ which includes the now defunct CAF Cup and Cup Winners’ Cup.

SuperSport United (59) are third on the list of most matches representing South Africa‚ followed by Kaizer Chiefs (54).

Sundowns coach Pitso Mosimane has said the pressure will be on Esperance to get a home win.

“The pressure is not on us‚" Mosimane told reporters.

Sundowns have confirmed that Khama Billiat will miss the match through injury‚ but the quartet of captain Hlompho Kekana‚ Anthony Laffor‚ Wayne Arendse and Motjeka Madisha are all available.

And Mosimane says his team are eyeing the quarterfinals and that they will not be too overawed by the quality of Esperance.

“You mustn’t be emotional about what is in front of you‚ you must look at the bigger picture‚” Mosimane said in Tunis.

“And the bigger picture is for us to try and qualify for the last eight and hopefully when we do that‚ we will get all our [injured] players back.

“It’s not about being emotional against Esperance‚ because if you do that you lose focus on the bigger plot. And the bigger plot is the whole group and to keep going and make sure we are going to the quarterfinals.”

Vita Club are yet to break their duck with three successive defeats‚ and host St George in Kinshasa on Tuesday.