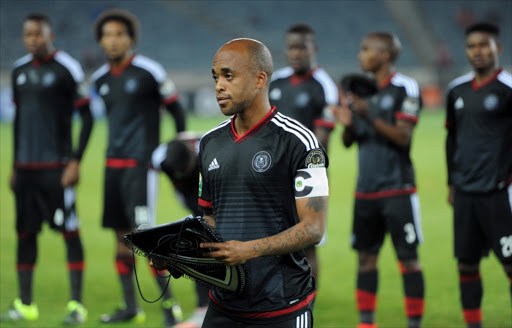 "We feel good because we know what we want and what we are up against," said Oupa Manyisa.
Image: Gallo Images

The Briton was surprisingly on the bench for Supersport United's goalless draw against TP Mazembe in their CAF Confederations Cup Group D encounter at the Lucas Moripe Stadium in Atteridgeville on Tuesday.

"It's been the most difficult thing I've done in my career," he said.

"I don't need to look for excuses because the results have been coming, but it's been very difficult.

"I like to do things properly and not half and half."

Baxter said he knew if he failed with the one job, he would be accused of spending too much effort on the other.

"I've got one more game - the cup final - but I can't breathe out because there are the Cosafa and the Chan games [with Bafana].

"My commitment to Supersport will be total, right up until the final," he said.

Pirates captain Oupa Manyisa does not believe their inactivity for almost a month and Supersport United's busy schedule on the continent will have a negative impact on the Buccaneers' attempt to win the Nedbank Cup.

Bucs last played a competitive match on May 27 against Golden Arrows. In contrast, Supersport have been busy in the CAF Confederation Cup, visiting TP Mazembe in Lubumbashi on June 3 before hosting them on Tuesday, four days before the Nedbank Cup final.

"I don't think that it's going to help us or count against us.

"We are professional players. We had to train very hard preparing for this game," Manyisa said.

"On Saturday it won't be about them playing in the Confederation Cup and us not playing. I don't think they will be fitter than us.

"We will see on Saturday. We have been playing some friendly games and playing against each other at training.

"We feel good because we know what we want and what we are up against," the captain said.

This will be Pirates' 17th Nedbank Cup final, just one shy of the record set by Kaizer Chiefs.

But, unlike their great Soweto rivals, their return to the country's FA Cup decider has been scratchy.