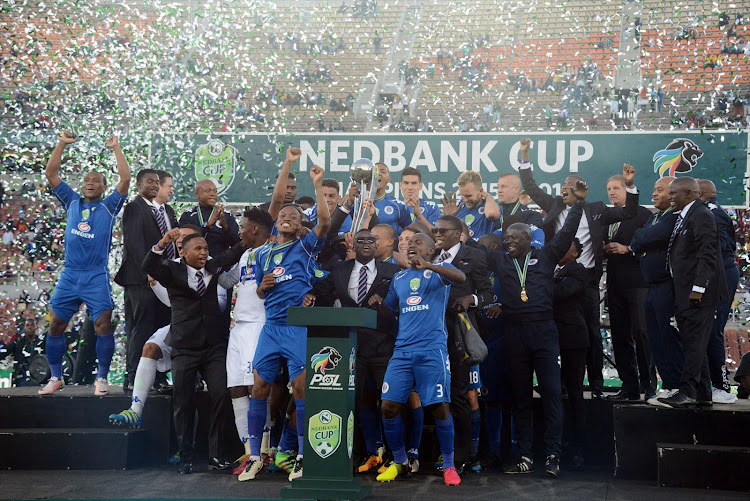 TimesLIVE brings you 12 quick Nedbank Cup facts and figures ahead of the 2017 decider between SuperSport United and Orlando Pirates at the Moses Mabhida Stadium in Durban on Saturday.

1. Remarkably‚ only three different teams appeared in the final of the competition in the first seven years it was played. Pirates (six appearances)‚ Kaizer Chiefs (five)‚ Zulu Royals/AmaZulu (three) were the only sides to contest the final between 1971 and 1977.

2. This year’s finalists Pirates are the second-most successful side in the Nedbank Cup competition after Chiefs (13 wins) with eight victories from 16 previous final appearances. Their last success was in 2014‚ but they also lost the 2016 decider‚ going down 3-2 to SuperSport.

3. Current SuperSport coach Stuart Baxter is the only tactician to win the Nedbank Cup twice since it came into its current incarnation in 2008 (with Chiefs in 2013 and SuperSport in 2016).

Thabo Mnyamane knows that at a personal level Saturday’s Nedbank Cup final against Orlando Pirates is a chance for the SuperSport United forward to ...
Sport
5 years ago

4. Moses Mabhida Stadium has now hosted the Nedbank Cup final in three of the last five years. This year’s finalists have contrasting records at the venue. Pirates beat Bidvest Wits 3-1 in the 2014 decider in Durban‚ while SuperSport lost 1-0 to Chiefs the year before.

6. Eight teams have reached the competition’s final on one or more occasion and never lifted the trophy. They are AmaZulu (six appearances)‚ African Wanderers (two)‚ Black Leopards‚ Highlands Park‚ Manning Rangers‚ Mpumalanga Black Aces‚ Free State Stars and University of Pretoria (all one).

7. The biggest victory in the Nedbank Cup competition final came in 1989 when Moroka Swallows defeated Mamelodi Sundowns 5-1 in a replay of the decider that year. The first game finished 1-1.

8. Many cup finals are tight affairs‚ but not when Pirates have competed in the Nedbank Cup decider over the last decade. Bucs’ three final appearances have seen 13 goals scored after 3-1 wins over Black Leopards (2011) and Wits (2014)‚ and a 3-2 loss to SuperSport United last year.

9. Pirates won three Nedbank Cup competition finals in a row between 1973 and 1975‚ a record for any club. They also appeared in the next two‚ but lost both to Chiefs!

11. At least one team from Soweto have contested 31 of the 44 Nedbank Cup competition finals that have been played since 1971. Pirates will make that record 32 from 45 this year.

12. Fifteen finals in the Nedbank Cup competition have gone to extra time‚ but only two in the last decade. The first was when Chiefs defeated SuperSport 1-0 in 2013 thanks to Bernard Parker’s winner‚ and then again in 2015 when Mamelodi Sundowns and Ajax Cape Town played out a 0-0 draw‚ with the Brazilians claiming the trophy 4-3 on penalties.