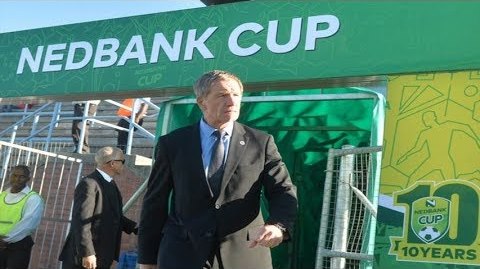 Stuart Baxter says United ready for Pirates clash - Coach Stuart Baxter says SuperSport United will not let their guard down at the Moses Mabhida Stadium when they take on Orlando Pirates in the Nedbank Cup final on Saturday. The final will be Stuart Baxter’s last before he departs to coach the national team.
Image: TimesLIVE/YouTube

Stuart Baxter believes that Orlando Pirates perform to a certain style of play no matter who they are coached by.

As Baxter prepares for his final assignment as SuperSport United coach before becoming full-time boss of Bafana Bafana‚ he has the perhaps delicate task of figuring out which Pirates will turn up against his team in Saturday’s Nedbank Cup final at Moses Mabhida Stadium.

Pirates were poor in their 80th anniversary season‚ finishing a dismal 11th in the PSL. They looked far more determined trying to atone for that by gunning for a consolation trophy in the Nedbank.

Baxter knows Bucs have shown some‚ though not drastic‚ improvement in structure under their third coach in 2016-17‚ Swede Kjell Jonevret.

The SuperSport coach is sure Pirates will be far from the diabolical mess that conceded a 6-1 thrashing against SuperSport in the PSL in November at Mbombela Stadium.

“When I say a completely different team‚ our technical staff were saying to me‚ ‘They may play this way‚ they may play one up‚ or two up’. And I was saying: ‘Look‚ Pirates are Pirates’.

“And if it’s Kjell who’s coaching them or Muhsin (Ertugral)‚ we know that Pirates play the way that they want to play. Their club is set in stone.

“Now if they play four across the middle‚ or three‚ it doesn’t really matter because they’re still going to play in that way. The supporters demand it‚ and that’s how it is.

“I think tactically Kjell will try to put a structure on it that is his. And I think Pirates will make sure that it’s theirs enough because of their style.”

Put that way‚ Baxter makes Saturday’s final sound much like that of last year‚ won 3-1 by SuperSport – between a structured Matsatsantsa with a plan‚ and a struggling Pirates trying to find their structure but with a huge dose of unpredictability thrown in.

“I think if you’ve had the season that Pirates have had‚ it is a bit unpredictable‚” Baxter said.

“I don’t think that’s because of the coach or other things. I think it’s because they’re thinking to themselves‚ ‘We want to get back into a rhythm’.

“And I think Kjell is a structured coach and he’ll want to be putting his moniker on the team. At any team‚ even Manchester United‚ a coach wants to do that.

“But I think the constraints of their history will always guide you. And I think it was the same with me when I went to Kaizer Chiefs. I wanted to put my stamp on things‚ but it has to be done I a certain way – the Chiefs way.

“And that’s one of the challenges we have as coaches. I think maybe the (SuperSport) players know the way that I want to play and they can do that without thinking about it. Maybe the Pirates players are still thinking about the way Kjell wants them to play.”