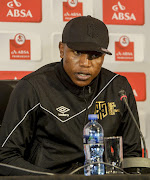 Cape Town City captain Lebogang Manyama leads the nominations for the Premier Soccer League awards after he was named in four categories yesterday.

Manyama had a brilliant season. He finished as the league's top goal scorer after finding the back of the net 13 times.

He has also been nominated in the footballer of the season, players' player and the Telkom Knockout player of the tournament categories. City's Aubrey Ngoma and Wits's captain Thulani Hlatshwayo received three nominations each.

Footballer of the season:Hlompho Kekana (Sundowns) and Thulani Hlatshwayo (Wits)