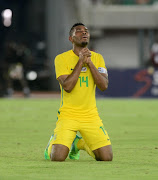 Gavin Hunt awakened a “beast” in Thulani Hlatshwayo that the Bidvest Wits defender did not know he possessed‚ the club’s Player of the Season said after winning that award.

Centreback Hlatshwayo‚ the central defensive stalwart in the 2016-17 Absa Premiership season that saw Wits win their first league title in a 95-year history‚ credited coach Hunt with bringing a greater competitive edge to his game more so than any of his previous coaches‚ the defender and new Bafana Bafana captain said.

“All of them contributed to me.

“But coach Gavin did awaken a beast in me – something I never had.”

Hlatshwayo was one of Hunt's first signings – from Ajax Cape Town – when SuperSport United’s three-time successive treble winner from 2008 to 2010 arrived at the Johannesburg club four seasons ago tasked with transforming the Clever Boys from top eight to championship contenders.

The uncompromising centreback was soon handed the captain’s armband by Hunt.

“Obviously he’s a coach who likes winning. He’s a coach who has a lot of character‚” Hlatshwayo explained of the winning mentality that Hunt has instilled in the defender’s psyche and game.

“Coming from Ajax‚ every time we had a loss everything was normal. Everything was just chilled – looking to the next game.

“Because we knew that playing away the only points we would get was one or zero. But at home it was three.

“Even now they’re still doing it. Sundowns struggle playing Ajax in Cape Town this season. That’s the environment that we got used to.

“And whenever we lost a game away – because Ajax are one of the teams who travel most in away games – everything there was treated as normal.

“But moving to Wits‚ whenever we lost there would be a lot of meetings.

“After a game we’ll normally be off the next day. But‚ after losing‚ sometimes the coach would say‚ ‘Everyone is in‚ and the ones who played 90 minutes will train like the ones who were on the bench or in the stands’.

“That’s the kind of coach that we have. So he builds character in every player.

“Whenever you had a bad game he will call you in one on one. He gave me the armband in the first three months at the club.”

Hlatshwayo (27) has been nominated for the PSL Player of the Season at the league’s awards in Sandton on July 10.