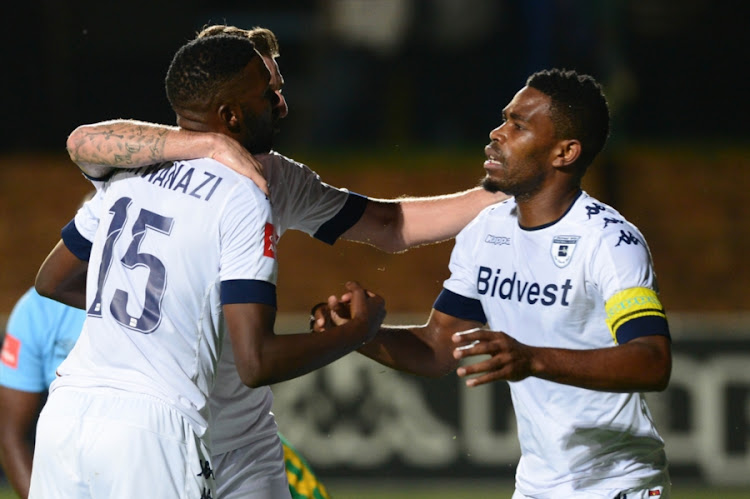 Bidvest Wits’ Player of the Season Thulani Hlatshwayo says he and his central defensive partner‚ Buhle Mkhwanazi‚ used to be bitter and unfriendly enemies.

The cornerstone of Wits’ first league title win in their 95-year history was a centreback pairing that coach Gavin Hunt brought to the club on his arrival four seasons ago.

In defence they were almost impassable‚ and both weighed in with crucial goals too – Hlatshwayo four in all competitions and Mkhwanazi five.

Hlatshwayo‚ nicknamed ‘Tyson’ for obvious reasons‚ said when two of the most uncompromising defenders in the country played at opposite ends – he for Ajax Cape Town and Mkhwanazi for Pretoria University – they did not get on.

On their goal-scoring feats in the past campaign‚ Wits’ captain said: “Gavin will always shout at us‚ me and Buhle‚ and say: ‘Tyson has two goals‚ you have zero – what are you saying?’

“And then Buhle will score three‚ and I’ll be‚ like‚ ‘Now Buhle’s ahead’. We’re always motivating each other that way.

“I used to fight with Buhle when he played for Tuks and I was at Ajax. We were enemies between the two of us.

Gavin Hunt awakened a “beast” in Thulani Hlatshwayo that the Bidvest Wits defender did not know he possessed‚ the club’s Player of the Season said ...
Sport
4 years ago

“And the relationship we built when we moved to Wits. Because we signed at the same time‚ and we knew how long our contracts were. And that the only thing that we could united us. And it paid off.”

Mkhwanazi said of a combination that took three seasons to perfect: “I don’t see that a partnership like this will come again soon at Wits.”

While Hlatshwayo has become a defensive stalwart‚ and now also captain of Bafana Bafana‚ Mkhwanazi is yet to make a consistent breakthrough.

The former Tuks man was tipped for selection in new SA coach Stuart Baxter’s now famous first game – the 2-0 Africa Cup of Nations qualifying win against Nigeria in Uyo on June 10 – but denied by injury.

Mkhwanazi believes it might be tough transferring Wits’ central partnership to the national team‚ where Hlatshwayo has begun establishing solid understandings with Mulomowandau Mathoho and Rivaldo Coetzee.

Jose Ferreira has been assured by Orlando Pirates that they did not sign a conflicting pre-contract with Absa Premiership champions Bidvest Wits’ new ...
Sport
4 years ago

“I think when you partner with someone you need time. Me and Tyson worked for three seasons before we could master what we’re doing now.

“The same happens to him when he’s in the national team‚ with whoever he’s with there – whether it’s ‘Tower’ (Mathoho)‚ or Rivaldo (Coetzee). They need to get time and gel.

“And I think they can do well for the national team‚ in the same way that it happened for us at Wits.”