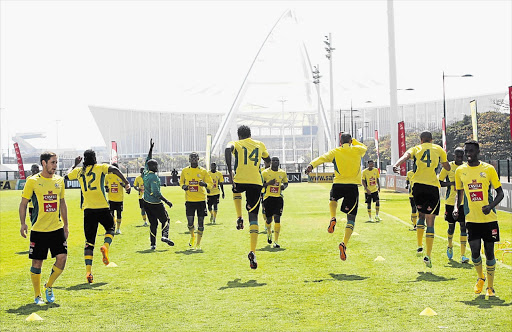 TimesLIVE counts 11 matches that have helped shape the past 25 years for Bafana Bafana – the good and the bad.

The first of those matches resulted in a win in Durban as Doctor Khumalo netted from the spot late on following a generous penalty award from the Botswana referee‚ who no doubt had a sense of occasion about him. 13 January‚ 1996

Fast forward four‚ at times turbulent‚ years and Bafana had another crucial clash with the Indomitable Lions‚ this time the opening game of the 1996 Africa Cup of Nations which South Africa hosted.

Once again it was important for the confidence of the side to get off to a good start in their maiden finals appearance‚ but few could have imagined the ease with which they dispatched the West Africans.

Phil Masinga‚ Mark Williams and Shoes Moshoeu were all on target. 3 February‚ 1996

Glory came at the final three weeks after that Cameroon win as Mark Williams came off the bench to net twice in two minutes against Tunisia for arguably South Africa's most memorable game in their history.

The sight of Nelson Mandela handing over the trophy to Neil Tovey at a packed Soccer City will forever be etched in South African football folklore. 16 August‚ 1997

Much maligned Bafana striker Phil Masinga scored a cracking 30-yard goal to qualify his side for the 1998 World Cup‚ their first-ever appearance at the global show-piece event.

The tall striker allowed the ball to bounce over his head and from 30-yards unleashed a fierce volley that left Congo goalkeeper Christian Samba with no chance. 28 February 1998

South Africa appeared in their second-successive Nations Cup final having reached the 1998 decider in Burkina Faso.

But this time it ended in disappointment as two early goals for Egypt from Ahmed Hassan and Tarek Mostafa pegged Jomo Sono's men back and they were not able to find a way back into the game. 24 June‚ 1998

South Africa went into their final 1998 World Cup Group C clash against Saudi Arabia knowing that a victory could put them into the second round of the competition in their first appearance at a global finals.

Things started well when Shaun Bartlett gave them the lead‚ but inexperience saw them concede two penalties‚ one in each half‚ to trail 2-1 going into the final few seconds.

Bartlett added a second‚ also from the penalty-spot‚ but the draw was not enough as France and Denmark advanced. 12 June‚ 2002

Bafana went into their final pool game at the 2002 World Cup finals knowing that a draw against Spain would be enough to put them into the second round ... but once again they fluffed their lines.

A terrible mistake from goalkeeper Andre Arendse allowed Raul to score a simple goal that put the nail in Bafana's coffin. 22 June‚ 2010

Things were tougher‚ but not impossible‚ this time round on home soil.

South Africa had to win by a handsome margin to advance to the second round of the 2010 World Cup and avoid becoming the first host nation not to reach the knockout stages.

But what was more‚ they needed to put in a fine performance to boost the morale of the nation and at the very least end their campaign on home soil on a high note.

One of the basics going into any football match is to understand the rules of the competition you are playing in.

Coach Pitso Mosimane and his technical team failed to do this though and ended up playing for a draw in a game they needed to win to qualify for the 2012 Africa Cup of Nations.

Goalkeeper Itumeleng Khune engaged in theatrical time-wasting tactics‚ and the players celebrated via dance after the final whistle in what is surely the most embarrassing moment in Bafana’s history.

South Africa hosted the 2013 Africa Cup of Nations and despite poor recent form‚ expectations were high that they could repeat their 1996 success against what looked an open field and with crucial homeground advantage.

It was not to be though and technically they bowed out without losing a game‚ their quarterfinal with Mali decided via the lottery of a shoot-out. 10 June‚ 2017

It was not the fact that this was a new era under Stuart Baxter in his second spell in charge of the side‚ nor that they recorded a first-ever away win over Nigeria.

It was the manner of their victory‚ which quite easily could have been 5-0‚ that gives Bafana fans hope that we are starting a new chapter of success with the national team.

If they can build on this performance‚ World Cup finals and potential African Nations Cup success should follow.