Downs fail to come the party 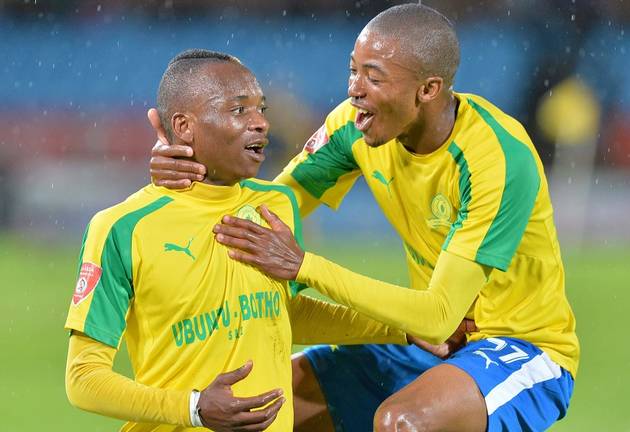 Khama Billiat celebrates with his goal with Thapelo Morena during the Absa Premiership match in this file photo .
Image: Lefty Shivambu/Gallo Images

Mamelodi Sundowns’ CAF Champions League defence may still be on track but their poor home form showed no signs of abating after their 1-1 draw against AS Vita last night.

They finished Group C in second place behind Tunisia’s Esperance, who beat Ethiopia’s St George 4-0 at home. Sundowns now have the tough task of hosting Group D winners Wydad Casablanca in the quarterfinals in early September before they face them in the return leg a week later.

They played well and should have been full value for the three points but they were fancy in front of goal.

They made their early intentions clear when Bangaly Soumahoro, Percy Tau and Anthony Laffor all came close.

It was imperative they put AS Vita on the back foot even though the Congolese club were out of the running. Sundowns broke the deadlock in the 35th minute when defender Thapelo Morena’s defence-splitting pass caught the Vita players with their pants down.

Fellow defender Thabo Nthethe intercepted the pass and, in a finish that would have made most strikers green with envy, coolly slotted the ball past the advancing Lukong Bongaman. About 40 minutes later Sundowns keeper Kennedy M we e n e was beaten by a superb Yazid Emane shot.

That was Sundowns’ j u st punishment for their profligacy in the moments leading to the goal. Between the 62nd and 66th minutes anyone between Sibusiso Vilakazi, Laffor and Yannick Zakri should have put the game to bed.