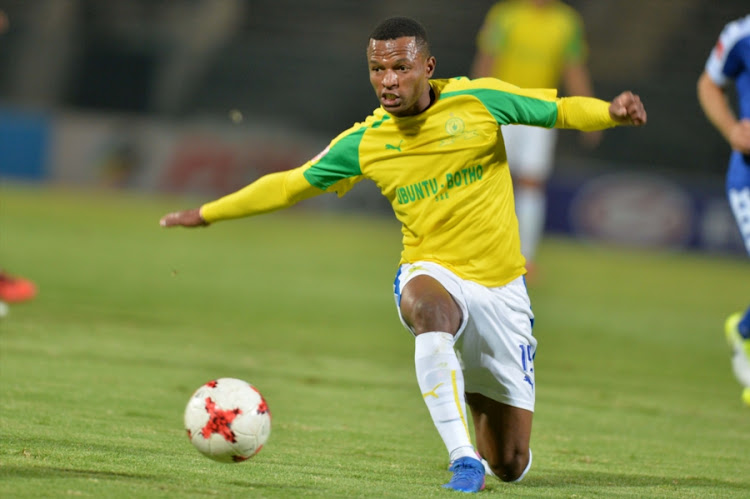 Mamelodi Sundowns defender Mzikayise Mashaba has been suspended by the club after he ‘substituted himself’ at half time of a crucial Absa Premiership match against Baroka FC during the title run-in last season.

Sources at the club have revealed that the left-back was receiving a pep-talk from some of his team-mates during a half-time team-talk‚ but he got irritated‚ then removed his jersey and declined to return for the second half.

Mashaba was replaced by Fares Hachi when the Premier League match resumed from the break.

Pitso Mosimane is banking on the professionalism of his Mamelodi Sundowns players over the next three weeks as he gives them a lengthy break after ...
Sport
5 years ago

There are also allegations that Mashaba has also on numerous occasions arrived at the team’s training base at Chloorkop smelling of alcohol and the technical team have had enough of his unprofessional antics.

Sundowns spokesman Thulani Thuswa confirmed that there was an incident involving Mashaba during the Baroka game‚ a 2-2 draw on May 10 that was crucial in Downs conceding their league title to Bidvest Wits‚ which led to his suspension.

“We can confirm his suspension but at the moment he remains a Sundowns player‚” Thuswa said.

Orlando Pirates have confirmed the signing of goalkeeper Wayne Sandilands.
Sport
5 years ago

Since that incident against Baroka‚ Mashaba has been dropped from the team and barred from taking part in team activities‚ and it remains to be seen if the player will be part of the team next season.

Mashaba’s business manager Tim Sukazi is also aware of the ‘incident’ involving his client but said it happened in the heat of the moment‚ and he does not believe it could have sparked trouble with his team-mates and the technical team.

“I was advised of an incident that happened at one of their matches. I was made to believe that what happened would ordinarily arise in the heat of the moment during a football match‚” Sukazi said.

“I do not believe that it is something that has sparked trouble between Sundowns and ‘Muzi’ (Mashaba). In my opinion‚ it is one of those internal matters that has been dealt with as such.”

The game against Baroka at the Lucas Moripe Stadium in Atteridgeville saw Sundowns conceded an injury-time penalty that was converted by Richard Matloga to drop two precious points at home in the Brazilians’ third-last match of the season.

On the same night‚ leaders Wits lost 3-1 against Free State Stars in Bethlehem. Victory could have given Sundowns the lead and a huge advantage in the title run-in.