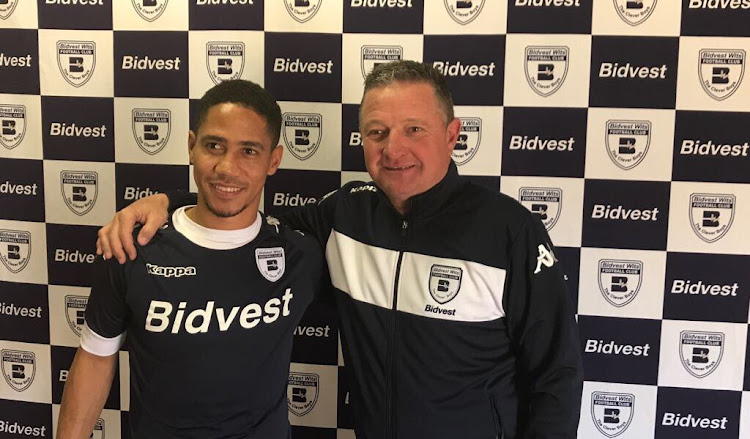 An informal chat bumping into each other at the SuperSport TV studios where Gavin Hunt was more interested in asking about Steven Pienaar’s family than luring him to Bidvest Wits convinced the former Bafana Bafana captain to join the Clever Boys.

As Pienaar was presented to the media along with fellow new signings including Daylon Claasen‚ Slavko Damjanovic and Bokang Tlhone pom Tuesday‚ he revealed that it was Hunt’s personal touch that made the former Everton midfielder chose Wits over the glamour clubs.

New league champion Hunt and Pienaar had bumped into each other making a TV appearance at SuperSport’s studios in Randburg.

“Obviously there were other options. But when I met with the coach in the studio he was more interested about my family and stuff like that‚ and that touched me‚” Pienaar said.

“And that made it quite easy for me to make the decision.

Bafana Bafana stand-in captain Mario Booysen has urged his national team-mates to respect to coach Thabo Senong during their Chan‚ third round ...
Sport
5 years ago

“Obviously joining the champions is an honour for me as well. And I want to play in Africa‚ so this was on the table for me.

“We bumped into each other in the studio‚ and he first spoke to my brother. And my brother came to me and said‚ ‘I’m going to leave you to give you some space to speak with the manager’.

“And it wasn’t about me joining Wits‚ it was just about me and talking about my family.

“I said to him that when my family comes down (from the UK) I would make the decision. And I kept to my word‚ and I gave him my answer.”

Pienaar’s choice of the league champions came despite interest from bigger‚ though recently less successful‚ clubs.

He went for the small family atmosphere club with an impressive coaching staff‚ management and facilities‚ who play at Bidvest Stadium and train at Sturrock Park‚ both less than 10 kilometres from the player’s tough home suburb of Westbury.

Advocate Vincent Maleka SC has been appointed to conduct the investigation into events that led to the tragic fatalities and injuries during the ...
Sport
5 years ago

“Obviously a lot of people knew the season before that I was close to joining Orlando Pirates and it didn’t happen‚” Pienaar said.

“My kids were still in school and I wanted them to stay another year in the UK‚” he said.

“And when I came back I didn’t speak to anyone. My agents were speaking to clubs. And they phoned me and told me about Wits.

“And then I bumped into the coach and we had a chat‚ and that made the decision quite easy for me.

“I have always said that I wanted to come back home and play‚ and wanted to enjoy my football and help the young players coming through. And whatever pressure that came with‚ I would deal with.

“And for me‚ I’m close to my mum as well so that made it easy.

Jabulani Shongwe has halted training at Bidvest Wits and is in limbo again as he awaits a suitor to take him away from the league champions.
Sport
5 years ago

“The most important people who are happy are probably my daughter and my mom. They haven’t seen me play in a long time now – they always watch me on TV. So I think they’re more excited than me.

“And obviously to be back home and play in front of people from Johannesburg – definitely a lot of people from Westbury are going to come to the ground so I hope Jose (Ferreira‚ Wits’ CEO) has got enough space for them to come and fit in.

“I’m just looking forward to it and to play my first game and I help the team to defend the trophy.”