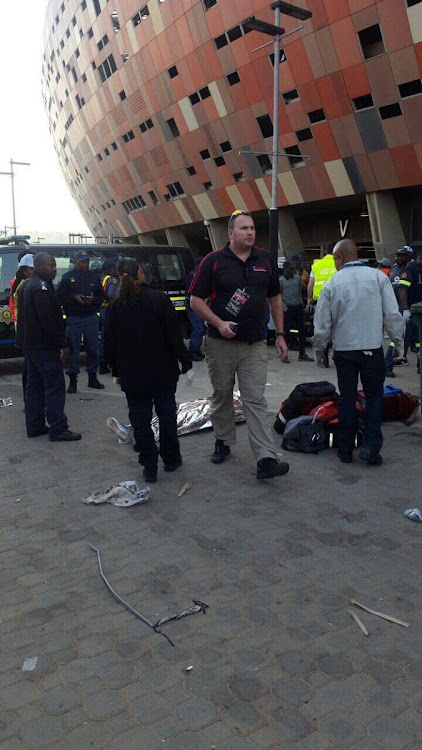 A motionless body of one of the soccer fans who died during the FNB Stadium fatal stampede on Saturday 1 August 2017.
Image: Supplied

Advocate Vincent Maleka SC has been appointed to conduct the investigation into events that led to the tragic fatalities and injuries during the Carling Black Label Cup match between Kaizer Chiefs and Orlando Pirates at FNB Stadium on Saturday.

Two people lost their lives during the traditional season opener between the two Soweto giants when supporters of both clubs‚ apparently with no tickets in their hands‚ tried to force their way into the venue at one of the gates.

The reason why the Carling Black Label Championship Cup match between Orlando Pirates and Kaizer Chiefs was allowed to continue after a fatal ...
Sport
4 years ago

It has been reported that the distribution of fake tickets also played a role in the tragedy‚ though at this point in time that has not been proven.

“The League‚ affected clubs‚ service providers‚ sponsors‚ supporters‚ the South African Police Service and all other role players will provide all possible assistance to enable Advocate Maleka SC in performing his task‚” the Premeir Soccer League (PSL) said in a statement on Tuesday.

“The League will ensure that the matter is dealt with expeditiously and properly.

THE decision to allow the friendly game between Orlando Pirates and Kaizer Chiefs to continue after a fatal stampede outside FNB Stadium on Saturday ...
Sport
4 years ago

“The League wishes to offer its condolences to the families of the bereaved and a speedy recovery to the injured.

“The League will not make any further comments on the matter until the investigation has been completed."