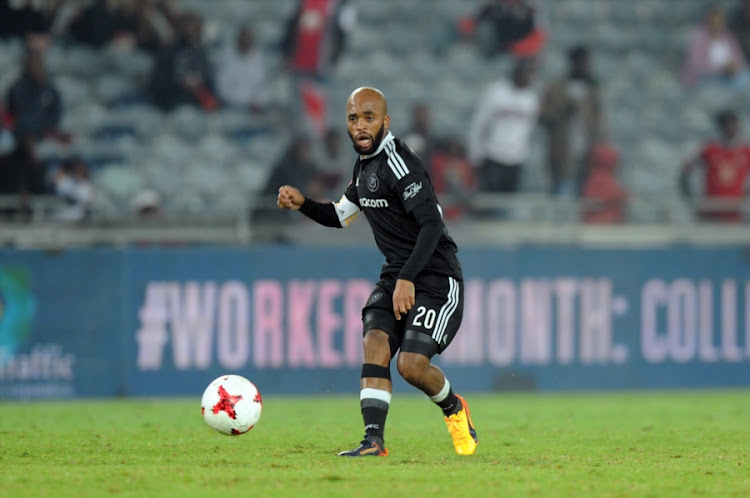 Oupa Manyisa in action during the Absa Premiership match between Orlando Pirates and Ajax Cape Town at Orlando Stadium on May 17, 2017 in Johannesburg, South Africa.
Image: Gallo Images

Mamelodi Sundowns have not confirmed the transfer of Oupa Manyisa to that club from Orlando Pirates‚ raising speculation that a swap announced by Bucs chairman Irvin Khoza on Thursday is far from a done deal.

In a quick initial response to Khoza’s bombshell announcement at Orlando Stadium ahead of presenting Pirates’ new coach‚ Milutin ‘Micho’ Sredojevic‚ Downs said they would make an announcement at a later stage.

Posting on their official Twitter page‚ the Pretoria club stated: “Mamelodi Sundowns will make an announcement in due course concerning Oupa Manyisa.”

Khoza did say on Thursday that the transfer of Bucs’ captain Manyisa would be a swap deal‚ with the “details still to be finalised”.

But he had the confidence – surprisingly to Sundowns‚ apparently – to announce it as being almost certain to go through.

“Before I start with the coach‚ I know that the media always anticipates events as they happen‚” Khoza said.

“I want to announce that one of our key players will soon join Mamelodi Sundowns. We had serious discussions with (Sundowns owner) Mr Patrice Motsepe for the last two to three days.

“It was not an easy decision‚ especially in terms of the value of the player and what he means to the supporters and to the club.

“But after serious soul-searching I thought it was in the best interest of the player to agree that he joins Sundowns.

If league titles were won on coaches’ introductory speeches‚ Steve Komphela would have lifted the PSL trophy with Kaizer Chiefs in 2015-16‚ and ...
Sport
4 years ago

"There are some few details that need to be finalised. That in itself requires that as soon as I finish here I must leave to conclude the final details.

“But to make it easy: Oupa Manyisa will be joining Mamelodi Sundowns.

“He goes with an unbelievable record. He has played 52 games in one season. He was part of the treble back-to-back team. Thereafter he was involved in about four or five finals‚ and also in the two Caf competition finals.

“He was a Bafana Bafana player. He leaves this club highly decorated. So it’s with mixed feeling that he will be leaving.

“I put him as my son‚ and he came here as one of the few players that covers 11 to 12 kilometres in a game. They don’t come in that kind of a breed.

Orlando Pirates have completed the signing of Milutin Sredojević‚ who returns to the club for a second stint having been in charge for a brief spell ...
Sport
4 years ago

“He came into the club from the Under-9s. His name suggested something else‚ but he surprised all of us.”

Khoza could not reveal which Sundowns player or players would be swapped should the Manyisa deal go through.

The diminutive playmaker has been Bucs’ stalwart player for his only professional club since being promoted from Pirates’ youth ranks in 2008.

Milutin 'Micho' Sredojevic got a call that was "hard to resist"‚ the coach said after he was announced as the new coach of Orlando Pirates at Orlando ...
Sport
4 years ago

He was instrumental‚ in his partnership in central midfield with Andile Jali‚ in Bucs’ treble-winning teams of 2010-11 and 2011-12‚ and the side that reached the finals of the 2013 Caf Champions League and 2015 Confederation Cup.

This past campaign Manyisa battled to capture any sort of fluent form returning from an ankle fracture that kept the midfielder out from September 2015 until the end of the 2015-16 season. - TimesLIVE