Maritzburg ambush Sundowns and dump their hosts out of the MTN8 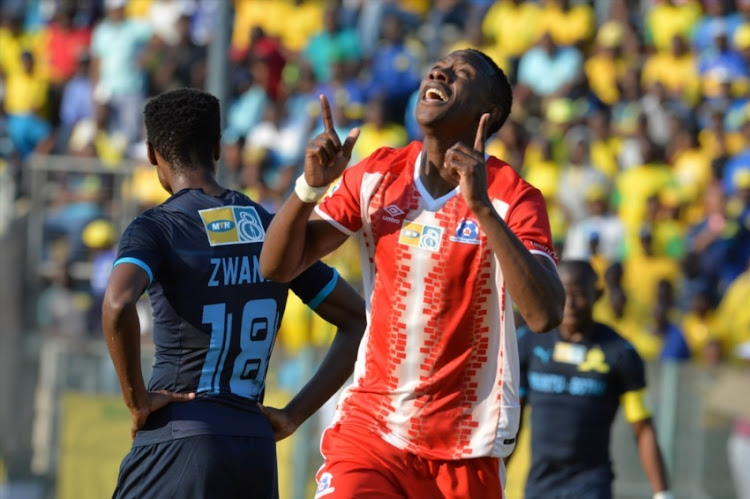 Maritzburg United produced an impressive display to knock Mamelodi Sundowns out of the MTN8 with a narrow 1-0 win in Atteridgeville on Sunday afternoon.

The goal that ensured Maritzburg’s place in the semifinal stage arrived just before the hour mark when Evans Rusike beat Sundowns goalkeeper Kennedy Mweene following a quick counter after the Brazilians had committed men forward.

Sundowns dominated the possession stakes and attacking chances but the visitors sat back for most of the game and relied more on catching their hosts on the break.

Those calculated counter-attacking moves paid off handsomely and Rusike was able to score the winning goal.

Sundowns were the better team but their work was not perfect as they were often guilty of committing costly errors‚ often giving the ball away easily.

They must improve ahead of their PSL opener against SuperSport United next weekend.

After a cagey start to the game largely as a result of the hot weather conditions in Atteridgeville where both teams tested each other with no real opportunities‚ Maritzburg came closest to opening the scoring on the half hour mark.

After a good attacking move‚ Rusike delivered a telling cross from the right wing after he managed to get the better of Tebogo Langerman but Sheldon van Wyk could not connect with the ball.

Manyisa finally came on for his Brazilians debut after 72 minutes in place of ineffective Sibusiso Vilakazi and Lebese was thrown in eight minutes later but they could not influence the result of this match.

On the stroke of half time‚ unmarked Khama Billiat missed a good opportunity to give Sundowns the lead when his close range shot went away from the target from a good cross by Thapelo Morena.

Five minutes after restart‚ Sundowns were unlucky not to have taken the lead when Thabo Nthete’s close range header from a cross by Billiat ricocheted off the upright and the Maritzburg defence reacted in the nick of time to clear the danger.

Then‚ Maritzburg delivered what proved the winner in the 58th minute through Rusike after a good counter attack.

Despite being a goal down‚ Sundowns continued to increase their tempo as they went in search of the equaliser and six minutes later Billiat‚ who wasted numerous other chances‚ connected with Morena’s cross inside the box but his header went wide of the target.

Sundowns pressed hard in the closing stages to force the match into extra-time but Maritzburg held on to this hard fought victory that ensured their place in the semi-finals at the expense of last season’s finalists. - TimesLIVE