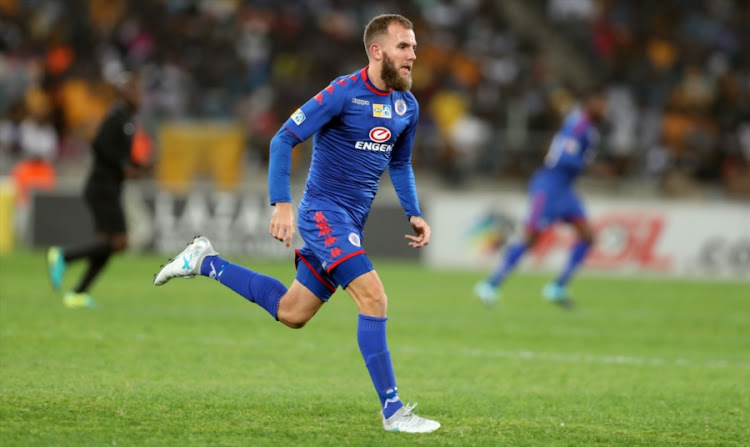 Mamelodi Sundowns have not given up their pursuit of Jeremy Brockie and they are preparing another bid for the star striker's signature.

Mosimane is confident that a deal could be concluded before the transfer window slams shut at the end of the month.

United have said that Brockie is not for sale but an insider told TimesLIVE that Sundowns are prepared to offer their Tshwane rivals around R10 million plus either Cuthbert Malajila or Mogakolodi Ngele.

Malajila and Ngele spent last season on loan with PSL champions Bidvest Wits and the insider said Mosimane hopes to sweeten the deal with one of the two players.

City incur the wrath of PSL

Cape Town City's multimillion-rand sponsorship with sports betting company SportPesa is under threat after the club failed to obtain clearance from ...
Sport
4 years ago

“We would like to get one striker up front and prepare ourselves in case Khama Billiat leaves‚" said Mosimane in reference to Brockie‚ even though he did not mention him by name.

"So‚ I would like to have another striker and you know the striker that I want.

“Hopefully‚ I can get him but it’s very‚ very‚ very difficult.

"When I have the opportunities that we created against Mariztburg there is only one man who can solve this problem.

Mosimane added that they won’t stand in the way of Billiat who has stalled to renew his contract amid reported offers from clubs in the MLS in the US and in the United Arab Emirates (UAE).

Striker Lehlohonolo Majoro must have thought he had left the boo boys behind when he departed the service of Kaizer Chiefs and Orlando Pirates but ...
Sport
4 years ago

“Khama (Billiat) is in his last year and we are trying to renew the contract.

"If he is not going to renew we will continue.

"It is the same with former assistant coach Rhulani Mokoena‚ who has left us to join Orlando Pirates.

"We are continuing because we are a very strong team.

“Khama doesn’t finish all the games‚ he misses eight to ten games every year with injuries and we are prepared.

Mamelodi Sundowns coach Pitso Mosimane has broken his silence on the signing of Oupa Manyisa and George Lebese and revealed that he was involved in ...
Sport
4 years ago

"We lost Katlego Mphela and we continued‚ Elias Pelembe‚ Lebohang Mokoena‚ Ramahlwe Mphahlele and we won cups and the Champions League.”

Mosimane said while negotiations with Billiat and his representatives continue‚ he expects him to give 100% at training and during matches because he has a contract that he must honour.

“He is still under contract with us and he is getting paid.

"Bongani Zungu was on his last year and we played him until the end.

"I played Keegan Dolly until the last and those boys even today we talk and there is full respect.

"You have to be professional and play.

"If the fans boo him‚ what he (Khama) must do is to put the ball in the net and I am sure they will celebrate.

Holders Bidvest Wits' bid to hold on to their MTN8 trophy will continue in a potential tricky away clash to Cape Town City at the end of the month ...
Sport
4 years ago

"If he renews we love him because he is a good player but if he doesn’t want to renew what else can we do?

"It’s his life‚ we also lost Bongani Zungu and won the league.

"We lost Keegan Dolly and won the cup.

"We are going to lose players and those are big names I am talking about‚ but we just keep on going.

"The important thing is to make sure that in between those phases we replace them.

"That’s the reason we have brought in Oupa Manyisa and George Lebese‚” he said.