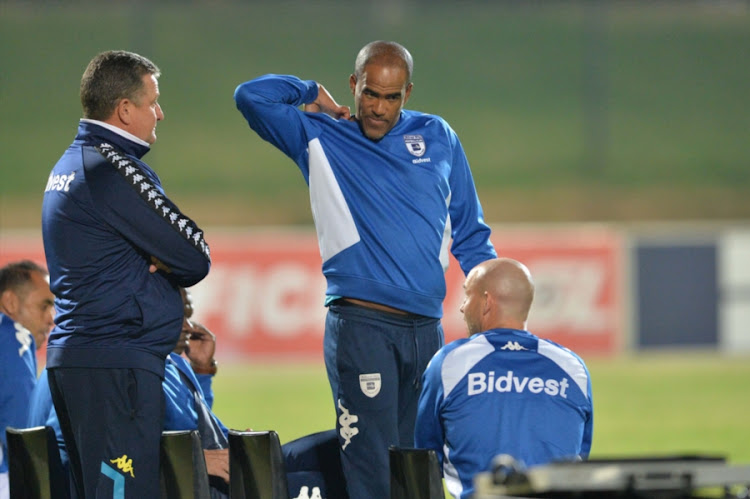 Paul Johnstone – the man whose name Benni McCarthy seemingly cannot recall – believes Bidvest Wits will not be derailed by coach Gavin Hunt’s absence on the bench in their Absa Premiership opener against Cape Town City.

What might have been a fascinating touchline showdown on Friday night at Bidvest Stadium between McCarthy and the coach who gave the ex-Bafana Bafana striker his debut at Seven Stars in 1995 has been put on hold.

Hunt is suspended and will watch from the stands after his sending-off in Wits’ ill-tempered penalties MTN8 win against Lamontville Golden Arrows last Friday night.

McCarthy admitted to being so nervous ahead of his head coaching debut when City edged Polokwane City 1-0 in the MTN quarters on Saturday that he had to go to the toilet several times before kickoff.

He also said this week he was relieved Hunt would not be on the bench on Friday and that he would much rather face off against Wits’ assistant‚ though the former Blackburn Rovers striker seemingly could not remember Johnstone’s name.

'Are you telling me when Kaizer Chiefs wanted Rama they never spoke to him before?' - Pitso Mosimane

A prolific goal scorer is an object of desire for almost every football coach worldwide and Mamelodi Sundowns’ Pitso Mosimane is no exception as he ...
Sport
4 years ago

Johnstone on Tuesday said he believes league champions Wits are such a well-drilled outfit they will not be affected too much by his presence on the bench‚ and Hunt’s absence from it.

“It’s not like it’s going to be fresh and out of the blue on Friday night‚” Johnstone said.

“The instructions and the planning are done in the week before the game as well as the final prepping in the pre-match meeting and in the dressing-room.

“All that I’ll need to do is iron out a few things if they’re not going right on the field.

“The guys are professional enough and we’ve been around each other long enough to know exactly what’s expected. And I don’t see any problems whatsoever.”

Johnstone is one of the quieter‚ lesser-known figures on a bench in the PSL.

Born in England‚ his parents moved to South Africa in the 1980s.

Ronaldo, Messi and goalkeeper Buffon on Uefa shortlist for player of the year

Cristiano Ronaldo, Lionel Messi and Gianluigi Buffon have been nominated for the Uefa player of the year award, football's European governing body ...
Sport
4 years ago

As a teenager he signed for Blackpool’s youth in England‚ before Terry Paine signed the left-sided midfielder as a 17-year-old for SuperSport United.

He played for Tembisa Classic and then Wits for four seasons in the PSL‚ before relocating back to England and qualifying as a fitness trainer.

He began in that capacity for Wits under Roger de Sa and Eric Tinkler‚ then graduated to being Clive Barker’s assistant‚ a role he continued under Hunt‚ while qualifying for his Caf B and Uefa B coaching licenses.

Johnstone knows Wits did not have a perfect start to their season in their 4-3 penalties‚ 2-2 after extra time‚ MTN quarterfinal win against Arrows.

“It’s nice to have played and know that you have some things to iron out because you go through your preseason and there’s always going to be room for improvement‚” Johnstone said.

Bidvest Wits are hoping to have Egyptian international Amr Gamal at training by Friday as they seek to pull off an audacious blow for South African ...
Sport
4 years ago

“I don’t think we were near as good as what we should have been.

"But there were also a lot of positives – that we came from 2-0 down‚ and showed that character being 10 men down.

“Those are massive positives that we’ll take into this game‚ and the negatives we’ve ironed out during the week.”