It is better to have 11 lions than 50 sheep: Micho on his Pirates squad 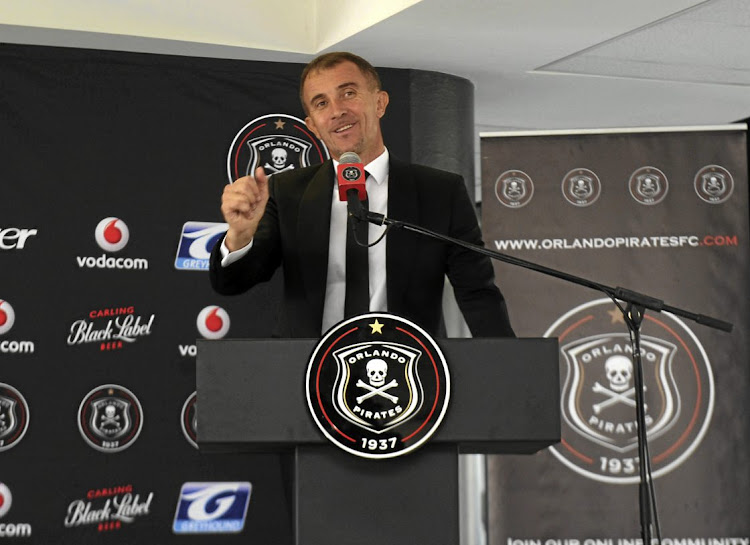 Orlando Pirates coach Milutin Sredojevic is happy that he has a workable sized squad‚ he has said ahead of his side's Absa Premiership opening match against Chippa United at Orlando Stadium on Saturday.

Sredojevic professed himself pleased‚ too‚ with the work he and his squad have put in since his appointment to replace Kjell Jonevret two weeks ago.

The former Uganda coach said his current squad size of around 30 is far more manageable than the 50-plus he had to contend with in his previous six-month stint as coach of the Buccaneers in 2006.

"Regarding the size of the squad‚ I am satisfied. It is a working environment where we currently have 23 in-field players plus two goalkeepers in action‚ while we have one goalkeeper and a few players out of action‚" Sredojevic said.

"So it is a manageable squad. When I compare it with my last time at Pirates where we had 53 players‚ it is absolutely manageable.

Orlando Pirates have fired back at former coach Kjell Jonevret after the man they part ways with earlier this month directed a scathing attack at his ...
Sport
3 years ago

"So I believe that coming to coach here‚ I am coaching great human beings‚ great players‚ and I believe that we have a manageable squad that could protect this badge of 80 years‚ and the people dreaming about it."

Sredojevic was so confident of managing to beat Pirates into shape in his two weeks in charge that he openly invited supporters of the club to Orlando Stadium to view the proof of the pudding themselves on Saturday.

"I would say that since my arrival and joining the training I am extremely satisfied with the commitment and hard work of the players.

"They have really shown an intention that the 2016-17 season that is behind us should be forgiven but not forgotten. In that regard everyone has put his best.

"We have camped four or five days in Rustenburg‚ we have done everything that we were supposed to.

All the PSL transfers ahead of the new season

With the new Absa Premiership season to start on Friday‚ most clubs have already put the finishing touches to their squads‚ though it has been a ...
Sport
3 years ago

"We got to know each other much better – the technical team‚ the players.

"We established a correct working relationship where we want each individual to contribute and to fight for their places in the team.

"Now‚ 48 hours before the game‚ I would say that I am satisfied‚ despite the shortage of time‚ with everything that has been done.

"I would say that what we have done‚ with the players we are having‚ I openly invite the supporters to come to our start of the season.

"I have belief in the players‚ in the work we have done‚ the support we shall get‚ and I have belief that God will recognise our effort and reward us with a good performance and a result against Chippa."