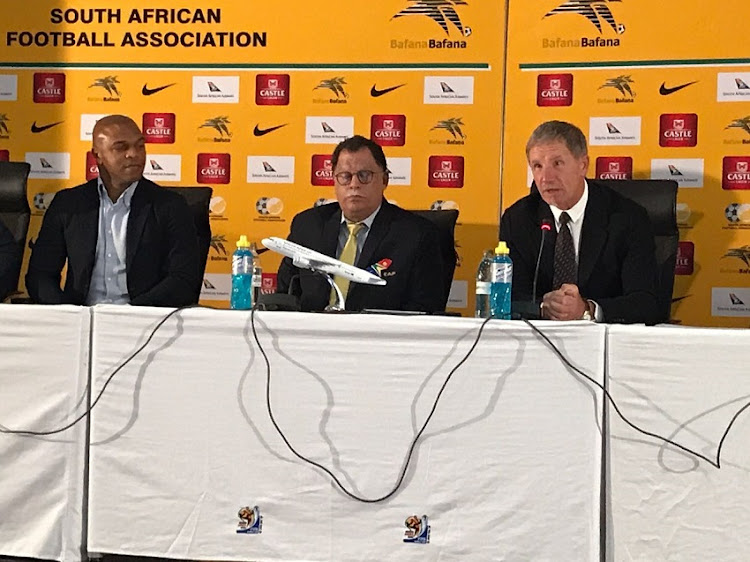 Stuart Baxter conceded that he taking a bit of risk in the goalkeeping department as Bafana No1 Itumeleng Khune did not play for his club Kaizer Chiefs on Sunday because of a chest infection.
Image: Mninawa Ntloko

Bafana Bafana coach Stuart Baxter says he needs soldiers to go to battle against Cape Verde in crucial back-to-back 2018 World Cup qualifiers next month and it was these fighting qualities that motivated the recall of veteran Morgan Gould to the national team after a four-year absence.

The 34-year-old Gould last played for Bafana in a 2-0 win over Central African Republic in a 2014 World Cup qualifier in March 2013 and his inclusion was the only surprise in the squad announced by the Briton on Monday afternoon.

“If we get an injury we’re not thinking about development‚ we’re thinking about someone who has to go in with the experience and with the knowledge‚ and being in good enough form to carry the colours on their shoulders not capitulating‚” Baxter said on Monday.

“So with all due respect to some of the younger players‚ Morgan has been outstanding in the PSL at this time. He has won numerous man of the match awards.

‘‘I’ve coached him at SuperSport (United)‚ I know his physical status now and he is probably better now than he was when I was at Kaizer Chiefs with him.

‘‘What this is‚ is saying that we have a soldier here who will go to battle for South Africa and in these two World Cup qualifiers.

‘‘We are not talking in six months time‚ 10 months time or in five years' time‚ we’re talking here and now.

“I think Morgan Gould is very well equipped to do that‚ plus his experience in the dressing room of big occasions will be a massive help.”

Bafana are second in World Cup qualifying Group D after two matches and they are level on points (four points) with leaders Burkina Faso‚ who only lead on goal difference.

The South Africans will face Cape Verde on Friday‚ September 1 in Praia in the first match and then host the return encounter four days later in Durban on Tuesday‚ September 5.

Baxter conceded that he taking a bit of risk in the goalkeeping department as Bafana No1 Itumeleng Khune did not play for his club Kaizer Chiefs on Sunday because of a chest infection.

Khune's potential replacement Darren Keet also did not play for Wits at weekend because of a niggling injury but both players are in the Bafana squad.

Baxter said while he expects both players to recover in the coming days‚ he does have a Plan B in case they fail to do so.

Bafana will assemble in Johannesburg on Sunday and then depart for Cape Verde on Tuesday.