More to Tinkler than the counterattack‚ says Grobler 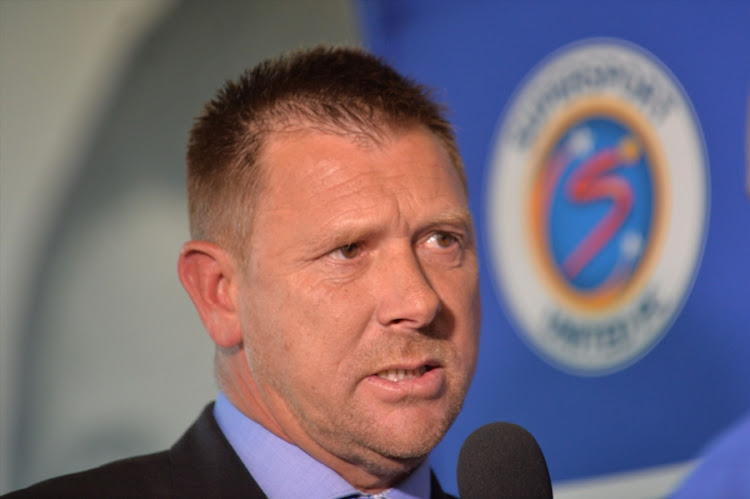 There is more to Eric Tinkler than transition football‚ said SuperSport United striker Bradley Grobler about his team’s new coach.

SuperSport under Tinkler will aim to press high in the games that require it‚ and dictate matches‚ Grobler said ahead of Saturday night’s MTN8 semifinal first leg match against Maritzburg United at Lucas Moripe Stadium (kickoff: 8.15pm).

Tinkler’s football last season steering Cape Town City to third place might have revolved more around counter-attack and transitions‚ but at a club with more resources and ball-players‚ the indications are that pressing will be as important a strategy.

SuperSport opened the season counter-attacking and it only partly worked in their 1-0 MTN8 quarterfinal win against Kaizer Chiefs in Durban‚ where Amakhosi hit the post twice.

Following a 2-0 league defeat against Mamelodi Sundowns in Atteridgeville‚ on Wednesday night Matsatsantsa appeared to surprise Chiefs with a high-pressing game that unnerved Amakhosi to a 2-1‚ 10-man defeat at FNB Stadium.

“I think a lot of people are just judging us on our first game against Chiefs in the MTN8. Ja‚ look‚ we sat deep and were not 100 percent ready for the game. And that’s not the way we’re going to play‚” Grobler said.

“So we’re not going to sit back and try and hit teams on the counter. We’re also going to press high.

“But I think it depends on who we’re playing. I think Eric is very good at changing tactics and moving the team around to suit different games.

“So‚ ja‚ it won’t always be 100 percent the same. But for sure we’re not a team who are going to sit back and just hit teams on the counter.”

Part of SuperSport’s up-and-down start appears to be been influenced by a late start a month ago to their preseason after a break from progressing past the Caf Confederation Cup group stages.

“I think if you look at the three games we’ve played now‚ it’s been a bit up and down. And‚ ja‚ we didn’t have the longest preseason – everyone knows that‚” Grobler said.

“You know‚ you need time. When a new coach comes in he’s got a few things he wants to change and it takes time.

“Unfortunately we didn’t have that. But I think in every game you can see things are starting to get a bit better. And the video sessions are getting a bit more detailed‚ and I think it’s only a matter of time before we click really nicely.

“And I think the first half against Chiefs showed that.”

Tinkler has said his side’s two-legged semi against Maritzburg will be their toughest two games of the season so far.

United have gotten off to a flier under Fadlu Davids. The team from the KwaZulu-Natal capital play to a high-tempo‚ fitness-orientated counter-attacking game.

It will be a fascinating match-up and interesting to see which response – pressing or counter‚ or a mix of both – Tinkler opts for.