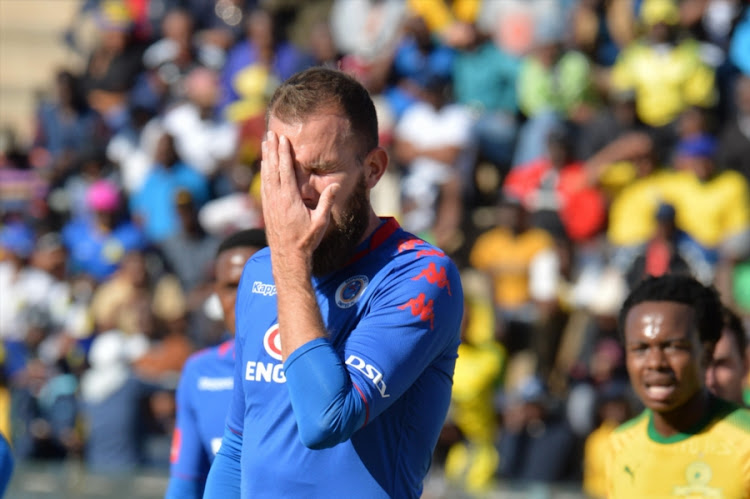 Jeremy Brockie is contracted‚ coach Eric Tinkler wants to build his team around the Kiwi‚ and clubs have to set a precedent that players do not decide when their contract ends‚ SuperSport United CEO Stan Matthews has said.

Matthews stressed that he is not at odds with Brockie‚ even if the CEO is annoyed that the Kiwi lost his focus amidst attempts by Mamelodi Sundowns to lure the striker to Chloorkop to the extent that it meant he was left out of a crucial cup semifinal.

Matthews denied what a source told TimesLIVE – that Brockie had requested to be left out of SuperSport’s 1-1 MTN8 semifinal first leg draw against Maritzburg United at Lucas Moripe Stadium on Saturday night.

But the CEO did say that players cannot be allowed to “sulk” their way out of contracts.

“Football has to take a stand‚” Matthews said.

“What culture are we encouraging‚ and is being inflated in the media‚ when Rivaldo Coetzee is allowed to go Awol (at Ajax Cape Town)‚ Lebogang Manyama is allowed to try to sulk his way out of Cape Town City‚ and Khama Billiat at Sundowns‚ and I’m dealing with this with Brockie?

“It’s not on. Guys are in contracts – it’s not a suggestion or guideline. If clubs don’t honour them we’re hauled before the courts and made to pay with damages.”

Matthews said Tinkler decided to drop Brockie against Maritzburg after the striker put in a distracted performance in last Wednesday’s 2-1 league win against Kaizer Chiefs at FNB Stadium.

“He was left out of the starting XI against Chiefs also. And we gave him a chance to come on at half time and show that he was motivated‚ and he didn’t take that‚” Matthews said.

Shakes Mashaba harbours no grudges against Bafana and Quinton Fortune

Eyebrows were raised after former Bafana Bafana coach Ephraim “Shakes” Mashaba declared his loyal and passionate support for the national team ahead ...
Sport
4 years ago

Now that SuperSport have made it clear that Brockie will not be moving‚ is there a question of management of an unhappy player?

Matthews said Brockie simply needs to get his head around being a SuperSport player to earn game time.

“I think it’s all a bit of a storm in a teacup‚” Matthews said.

“Not every player can expect to be sold whenever he wants to be sold. We’re standing by our commitments‚ and we expect him to do likewise.

“The thing is the longer he’s on the sidelines it’s going to hurt him as well us. So he’s got to decide what kind of professional he is now.

“There’s nothing to manage. He’s a professional player under contract earning millions of rands‚ and we expect him to do his job to the best of his ability.

“And if he doesn’t do that I’m sure other clubs are also going to scratch their heads and wonder what kind of character they were showing an interest in.

“So it’s up to him. If he responds the way we expect him to‚ banging in goals‚ winning trophies and earning his way out of the club‚ it’s certainly not our intention to hold onto him forever.

“But we’ve just appointed a new coach. The coach wanted to build the team around Jeremy‚ and we’re not going to have that undermined.

“For certain‚ if we win a trophy and Jeremy’s giving 1000 percent‚ then don’t expect to see him at the club next season.

“But when that happens is our choice‚ not his choice. It’s nonsense.

That's a foul! Cape Town hits back at Comitis over stadium threat

“So really his future’s in his hands now.”

The Brockie saga‚ as TimesLIVE understands it‚ has unfolded thus:

- Sundowns made an offer and were turned down by SuperSport at the end of the 2015-16 season.

- At the end of the past season Downs made another offer‚ believed to be less than R8 million.

- SuperSport’s board ratified Eric Tinkler as the club’s new coach. Tinkler made it clear he wanted to build his team around Brockie.

- Matthews sent a letter to Sundowns saying Brockie was not available.

- The matter remained closed until‚ after the weekend where Sundowns lost 1-0 against Maritzburg at home in the MTN8 quarters‚ and Brockie scored as SuperSport beat Kaizer Chiefs‚ Downs began to pursue the striker again‚ offering a variety of players in exchange.

- Brockie wrote a letter to SuperSport requesting a transfer‚ which was turned down.