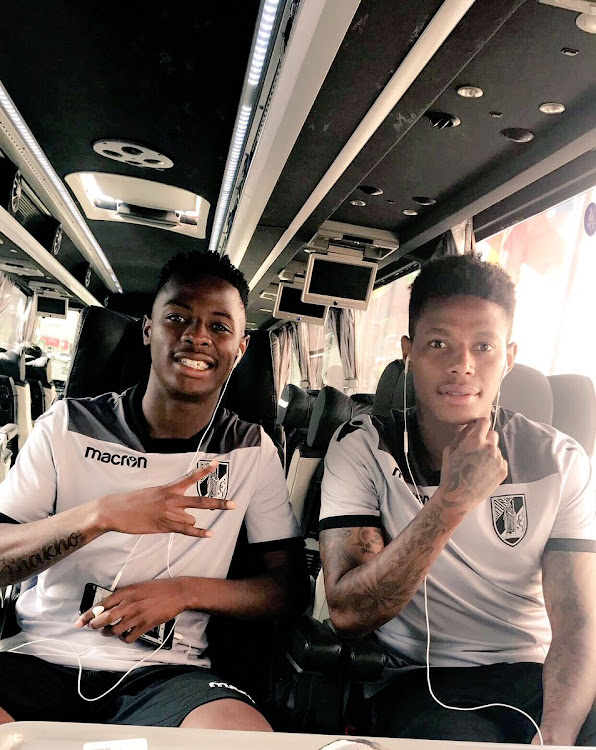 Bidvest Wits's star forward Phakamani Mahlambi (L) and his Bafana Bafana teammate Bongani Zungu (R) team up in Portugal where the latter is on trail.
Image: Bongani Zungu via Twitter

Bongani Zungu's agent was "racing against the clock" to conclude the paperwork and agree personal terms for the Bafana Bafana midfielder to sign for Amiens in Ligue 1 on Thursday night.

Zungu was waiting in Cape Verde‚ where he is part of Bafana's squad for their 2018 World Cup qualifier on Friday night‚ for the paperwork to come through and sign ahead of Thursday's midnight close of the transfer window.

Kapeluschnik was working against the clock to agree personal terms between Zungu and the French club‚ and complete the paperwork before midnight‚ with the added logistical nightmare of the player being on an island off the coast of West Africa.

"We're trying to get it done. We're rushing. There's a lot that needs to be done. It's 7pm and it has to be done by midnight‚" Kapeluschnik told TimesLIVE.

"The clubs have agreed in principle‚ but we haven't signed yet. We've still got to sort out the personal terms. We're trying but it's not done.

"It's close to being done. But there's a lot of paperwork. I'm racing against the clock to try my best."

Zungu would move to a bigger league‚ though his choice of club might be a risky one.

Amiens have been promoted to France's top-flight as the 2016-17 second-placed team in Ligue 2.

But Zungu‚ who has made clever club movement decisions until now in his career‚ would be guaranteed a season in Ligue 1‚ and also probably assured of game time at Amiens.

Zungu performed well in his first season in Portugal‚ recovering from arriving at Vitoria injured from Mamelodi Sundowns at the end of the 2015-16 season with 18 appearances in 2016-17.

He has reportedly attracted attention from Portuguese giants Benfica‚ and clubs around Europe‚ apparently also from Olympique Lyonnais in France.