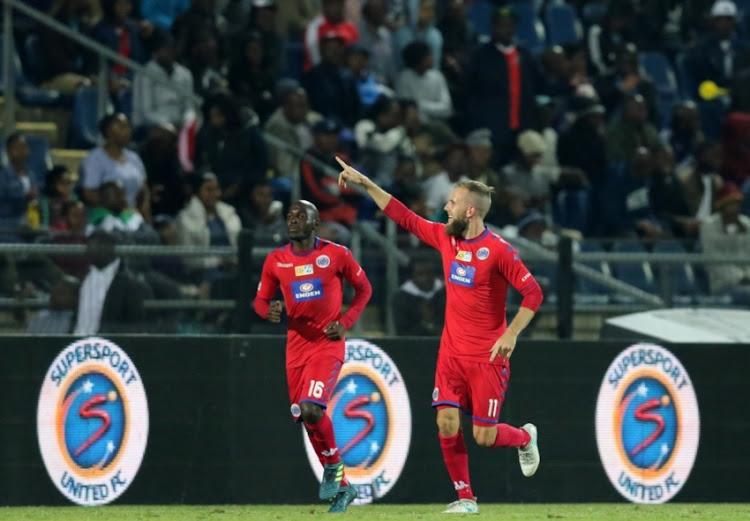 Jeremy Brockie showed no signs of any sulk after SuperSport United turned down his transfer request and passed a half century of goals for his club as they reached a third successive final by teaching a youthful Maritzburg United a few lessons in their MTN8 semifinal, second leg tie on Saturday night.

The 29-year-old Brockie, who handed in a transfer request in a bid to move to neighbours Mamelodi Sundowns but was turned down by the club, missed the first leg because he was not in the right frame of mind but showed he had put the issue behind him with a characteristically clinical display.

He scored his 50th goal for the club in the 14th minute with a header from close range and added another in similar fashion just before half-time.

It ensured a 3-1 aggregate triumph for the visitors, who are now in a third final in a row after finishing runners-up in last December’s Telkom Knockout and winning the Nedbank Cup in May.

SuperSport were just smarter than their rookie opponents, who had dreams of a first ever final appearance after a credible 1-1 draw away in the first leg of the semifinal last month.

Maritzburg were also let down by a lack of patience, poor decision-making and playing the game at too high a tempo.

They should also have been down to 10 men before half-time after a horror tackle from teenager Siphesihle Ndlovu on Grant Kekana.

It was a two-footed lunge on the shin of Kekana but inexplicably experienced referee Victor Hlungwani only issued him a caution.

But Maritzburg also had cause for complaint when a legitimate penalty appeal was turned down just three minutes after SuperSport had taken the lead.

Evans Rusike was impeded by Morgan Gould, who tugged him back by his shirt, as he was trying to get onto a square ball from Bandile Shandu in the penalty area with a potential goal looming.

Brockie had scored from a superb cross from overlapping left back Aubrey Mothiba, perfectly weighted to allow the Kiwi to get in between a static defence and head home despite the best efforts of goalkeeper Bongani Mpandle.

The second goal displayed SuperSport’s experience as they caught the hosts, who had a crowd of almost 10 000 backing them on a pleasant spring evening, napping again with a quickly taken free kick after Teboho Mokoena had been fouled.

Kekana whipped it in, Mokoena screamed forward to get onto the end of it and headed it square for Brockie to finish simply but effectively. If he was in any funk, it certainly was not evident.

Maritzburg hoped a double change at half-time might turned their fortunes around but new Cameroon signing Yazid Atouba contrived to get himself red carded in a cameo 33-minute debut – picking a first yellow for shirt pulling and a second for a blatant dive.