Manyama delighted after making his debut for Turkish side Konyaspor 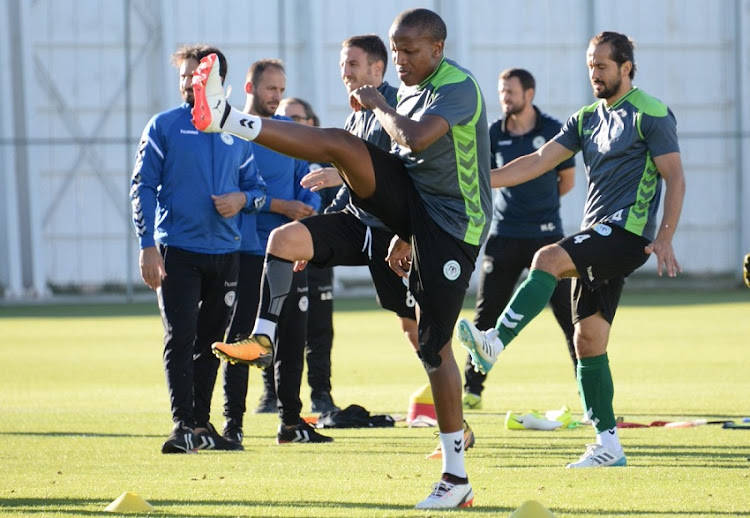 Lebogang Manyama made his debut for Turkish side Konyaspor barely 48 hours after signing for the club but could not help them avoid defeat on Saturday.

Manyama came off the bench midway through the second half after just one training session with his new teammates in a game played in front of empty stands with the Konyaspor fans barred from their home venue after violent clashes with Benfica supporters last month.

“It happened a little quicker than I thought it would‚ but it was good to be involved in the game and get a feel for Turkish football‚” Manyama told TimesLIVE.

“I am taking it one game at a time‚ obviously my ambitions are to play as much as I can and to do that I must get used to Turkish football and my teammates as quickly as possible. I want to try and help the team to get better.”

Bongani Zungu also made his debut for French Ligue 1 side Amiens as a second half substitute when they won 1-0 at Strasbourg.

Zungu came on 20 minutes into the second period and helped his side hold on to their lead following his transfer from Vitoria Guimaraes in Portugal last week.

Keagan Dolly came on in the second period for Ligue 1 side Montpellier as they slipped to a 1-0 defeat at home to Nantes.

Phakamani Mahlambi’s debut for Egyptian giants Al Ahly was delayed while they wait for his paperwork to be completed.

Thulani Serero showed no ill-effects from the hamstring injury that his club claimed was troubling him ahead of national team duty with Bafana Bafana against Cape Verde.

He started for Dutch side Vitesse Arnhem in their 3-0 away victory over Excelsior Rotterdam‚ though he was brought off with 20 minutes to go.

Lars Veldwijk played for Dutch side Groningen and earned a penalty for his team that was missed in their 1-1 draw with VVV Venlo.

Andile Jali came on at halftime for Belgian side Oostende as they finally broke their run of five defeats at the start of the new league season with a 1-1 draw at Mechelen.

Bafana’s Kakohelo Mokotjo (bench)‚ Kermit Erasmus (not in match day squad) and Tokelo Rantie (suspended) did not feature for their various sides in England‚ France and Turkey respectively.

Lebogang Phiri was also on the bench for French top-flight side Guingamp‚ while in Ligue 2 Lebo Mothiba limped off with injury midway through the first half as Valenciennes lost 3-0 at Nancy.

Joel Untersee played for Italian Serie B side Empoli in their 3-3 away draw with Palermo‚ while there was a brother on each side in the Scottish Championship as Keaghan Jacobs’ Livingston played to a 2-2 draw with sibling Kyle’s Queen of the South. - TimesLIVE