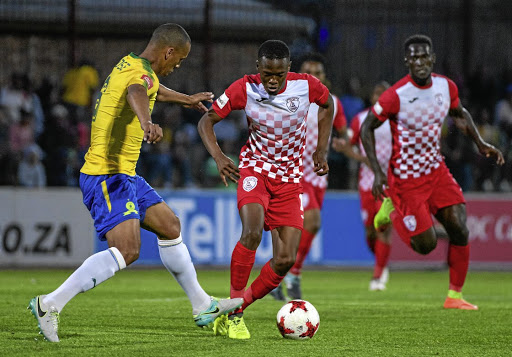 THE BALL IS MINE: Relebogile Mokhuoane of Free State Stars tries to sell Wayne Arendse of Mamelodi Sundowns a dummy during the teams' Absa Premiership match at Goble Park, Bethlehem, on Monday night. Sundowns won the match 2-1.
Image: Frikkie Kapp/BackpagePix

It took two moments of ruthless genius by substitute midfielder Percy Tau to deliver a hard-fought 2-1 win for Mamelodi Sundowns over Free State Stars in their Absa Premiership match at Goble Park on Monday night.

Tau, who replaced the injured Anthony Laffor on the half-hour mark, proved to be the difference with this stunning brace.

The first goal came two minutes from the break, when Stars defender Mumuni Abubakar hacked him on the edge of the box. He dusted himself off to curl a delightful free-kick over the wall and out of reach of the outstretched hands of Stars goalkeeper Badra Ali Sangare.

Most of the hard work for the home side was done by Paulus Masehe, Nhlanhla Vilakazi and Relebogile Mokhuoane with strikers Siphelele Mthembu and Edward Manqele playing on the counter.

Tau delivered another magical moment on the hour mark when he unleashed a powerful curling drive from the edge of the box to beat Sangare and ensure the three points.

Stars scored their goal in the dying seconds from a well-taken header by Vilakazi.

Sundowns went into this match desperate for maximum points after they were stunned by Polokwane City almost three weeks ago. But they have only moved to third spot on the log with six points from three starts.

They now shift their attention to Sunday, when they will meet Moroccan giants Wydad Athletic in the quarterfinals of the CAF Champions League at Lucas Moripe Stadium.

After the match they will hit the road to Casablanca for the return match, to be played six days later, hoping to stay on course to successfully defend their continental title.

Sundowns coach Pitso Mosimane and his men only return to league action at the beginning of October, when they will make the short trip to Royal Bafokeng Sports Palace in Rustenburg to face Platinum Stars.

Free State Stars, who remain at the bottom half of the table, return to league action against Baroka FC on Saturday in Polokwane.