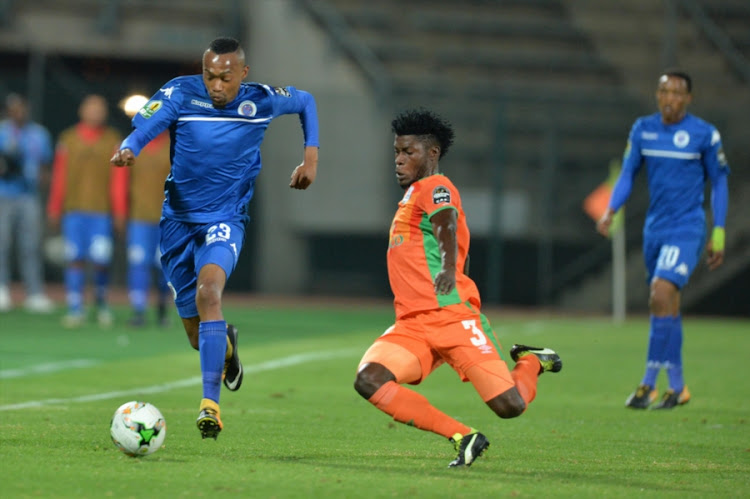 SuperSport United were held to a goalless draw by Zesco United in the first leg CAF Confederation Cup quarter-final match at Lucas Moripe Stadium in Atteridgeville on Friday night.

Despite creating numerous goal scoring opportunities early on in the first half with striker Bradley Grobler and tournament leading goal scorer with nine goals Jeremy Brockie wasteful, SuperSport will feel they have the upper hand having denied the Zambians an away goal ahead of the second leg.

The Tswhane side should have wrapped up the match just as it started with Brockie and Grobler coming close to score but were denied by a combination of stubborn defending and lack of accuracy.

Bradley did find the back of the net after he had chested down a looping cross over the defence only for Gabonese referee Eric Otogo-Castane to rule that the ball had touched his hand before he unleashed a sumptuous left-footed volley past the visiting keeper Jacob Banda.

The Zambians also had a goal disallowed for offside early on but it was the home that dominated proceedings in this Southern African derby between the two sides who were facing each other for the first time at continental level.

Matsatsantsa will go to the Lewy Mwanawasa Stadium in Ndola on Saturday September 23 for the return leg confident they can get a result that will take them to the semi-final of the second-tier continental club championship.

The South Africans have shown grit in this competition having suffered just one defeat since March with five wins and seven draws.

SuperSport head coach said ahead of the match that he had done extensive research on their opponents and will be eager to guide his new side to the latter stages of the competition.

He is no stranger to the knock-out stages of this competition having led Orlando Pirates to the 2015 final only to come out unstuck by Tunisian giants Etoile du Sahel.

The winner of the second leg in Ndola on September 23 will advance to the semi-finals where Algeria's MC Alger or 2011 losing finalists Club Africain of Tunisia will lie in wait.

Kolo Toure has joined Scottish champions Celtic as part of their coaching set-up after announcing his retirement from playing, the club said on ...
Sport
4 years ago

The growing anxiety at Bidvest Wits will be tested further when they travel to Kaizer Chiefs in the Premier Soccer League on Saturday evening‚ ...
Sport
4 years ago

The fact that Kaizer Chiefs midfielder Willard Katsande has reached 200 matches for the club doesn’t mean he will stop listening to advice‚ even from ...
Sport
4 years ago