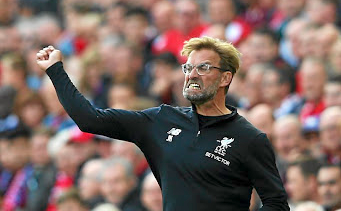 Alan Shearer has insisted Liverpool have barely improved at all since Jurgen Klopp replaced Brendan Rodgers as manager in October 2015.

Rodgers was sacked despite masterminding Liverpool's most genuine Premier League title challenge during their 2013-2014 season.

Liverpool were eventually pipped to the title by Manchester City after dropping points against Crystal Palace and Chelsea in their run-in. Former England international Shearer believes Klopp has done little to improve the team's familiar failings in the two years he has been at the club.

Since taking over the reins at Liverpool, Klopp's side have conceded 91 goals in 73 games, four goals more than Rodgers' team allowed in the same number of games.

"The truth, however, is that Liverpool are no different under boss Klopp than they were under Brendan Rodgers," Shearer wrote in his Monday morning column for The Sun.

Liverpool drew 1-1 with Burnley on Saturday, despite having 35 shots to the visitors' five, a result that leaves them eighth in the table with just two wins from five games.

"What I witnessed on Saturday in their draw at home to Burnley was laughable," he added. "I am left wondering just what he does on the training ground when the same defensive errors are repeated week in, week out."

Klopp has rejected suggestions he should have done more to sign a new centre-back after a deal to sign Virgil van Dijk from Southampton did not materialise.

And Liverpool's problems at the back have come under increasing scrutiny this season since their 5-0 thrashing at the hands of Manchester City.

The German has instead reiterated his intention to stay faithful to the players he already has at the club.

"A big part of football and life is really to put faith in the people you work with - trust them - because they all can improve. I had to make a decision and the decision was our boys are not worse than them," Klopp said before Liverpool's draw with Burnley.