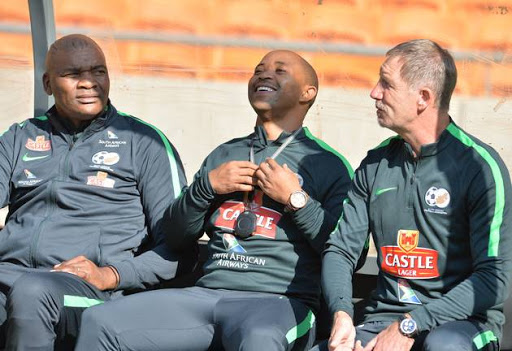 Owen Da Gama was released from his contract as South Africa’s Under-23 coach after new Bafana Bafana coach Stuart Baxter decided not to retain him as his assistant‚ South African Football Association (Safa) CEO Dennis Mumble has said.

This explains how Da Gama could be appointed the new head coach of First Division Highlands Park on Tuesday.

No official announcement was ever made by Safa that Da Gama – whose post as Bafana assistant to Baxter’s predecessor‚ Ephraim “Shakes” Mashaba‚ automatically entailed coaching the U-23s – had been released as the Olympic team’s coach.

Mumble confirmed this on Wednesday.

“He’s been released formally from the association. Because it was an understanding by the assistant-coaches that their contracts are linked to the contract of the head coach‚” Mumble said.

“That’s how we contracted them in the first place.

"We made it clear that clearly‚ if the head coach changes‚ a new coach must have the option of choosing the support system.

“There’s still an assessment period going on until the World Cup qualifiers‚ and then Baxter will sit down with me to give me what will be his long-term assistant-coaching set-up.

“And Baxter is conducting these assessments now.

"But clearly Owen Da Gama was not part of his plans.”

Da Gama being released would appear to leave a vacancy open for an U-23 coach.

Baxter has already indicated that his second assistant‚ appointed on a temporary basis last month‚ Quinton Fortune‚ could have a role to play with SA’s junior teams‚ and Mumble confirmed that plan.

Mumble was asked to clarify at what point Fortune might be given a permanent Bafana contract.

“He has a contract – it’s what we call an assignment contract.

"The intention was never to make him a full-time assistant-coach‚” Mumble said.

“The coach has said that he would want one full-time assistant and the other would be a legend who he would be mentoring.

“Quinton was the first to say that‚ ‘I don’t have the experience at that level’.

“But the coach (Baxter) was very clear‚ even during the negotiations‚ before we hired him that one of the things he wanted was to mentor a legend or two.

“Benni McCarthy was taken by Cape Town City and Shaun Bartlett is now busy trying to get a team (University of Pretoria) promoted again.

Aaron Mokoena said he didn’t really have ambitions to be a coach.

“For Quinton‚ yes we will utilise him in our junior national teams as part of that programme.

“But he does have an assignment contract‚ because it’s not a full-time job. If it becomes full-time at a junior level then obviously we will amend that.

“But that discussion will only take place at the next National Executive Committee meeting.”

South Africa is not considering offering itself as an alternate host for the African Nations Championship (CHAN) after Kenya were stripped of the ...
Sport
3 years ago

Cape Town City coach Benni McCarthy says he has no option but to gamble on Mpho Matsi and play the defensive midfielder in Saturday’s Premier Soccer ...
Sport
3 years ago

Mauricio Pochettino praised Harry Kane after the English striker scored a perfect hat-trick for Tottenham Hotspur to give them a 3-0 victory at APOEL ...
Sport
3 years ago

'Eric is doing very well and he deserves it'

Irvin Khoza wanted to persist with Eric Tinkler as head coach at Orlando Pirates just over a year ago but gave in to supporter pressure, the Bucs' ...
Sport
3 years ago