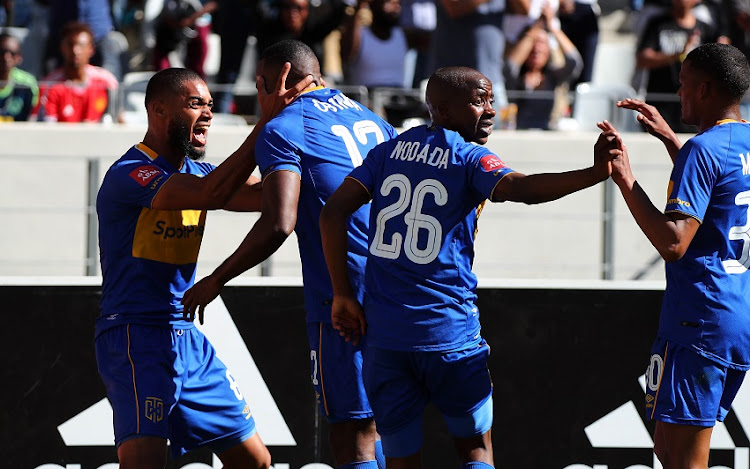 Nigerian import Victor Obinna began to repay the faith shown in him by former teammate Benni McCarthy as he delivered victory for Cape Town City in the derby at the Cape Town Stadium on Saturday afternoon.

His goal set up a 2-0 win over Ajax Cape Town and took McCarthy’s side up among the Absa Premiership log leaders on 12 points.

Discarded after a horror spell in the German Bundesliga‚ Obinna took up McCarthy’s offer of a season in the Cape and in just his second start showed his pedigree with the only goal.

“For us it was all about there points‚ never mind the derby‚” said McCarthy afterwards.

"It’s cup finals for Ajax but just three (points) for us.

A 16‚000-strong crowd enjoyed sunny conditions and a good tempo to the game where City’s pressing game was a lot more effective and Ajax looked too tentative at times.

Ajax ‘keeper Brandon Petersen had to scurry across to prevent a potential own goal from Roscoe Pietersen who got a deflection to a free kick whipped in by Ayanda Patosi in the first real moment of action after 16 minutes.

City used the left wing to good effect with the pace of Lyle Lakay and Ebrahim Seedat as Thabo Nodada dictated matters in midfield.

Ajax’s first effort was a curling free kick from Zambian Rodrick Kabwe‚ recently called-up for World Cup duty by his country‚ which Sage Stephens tipped over the top.

The goal came in the 34th minute as Ajax gave away possession to Patosi‚ who fired a clever ball over the top of the defence to find Obinna bursting through the offside trap and getting a decisive touch from close range.

The former Nigerian international is hoping a spell in the Premier Soccer League will revitalise a career that has seen him on the books of the likes of Inter Milan‚ West Ham and Lokomotiv Moscow.

A groin injury saw him rest at the break.

Ajax might have got an equaliser on the stroke of half-time from a corner but Tashreeq Morris got in the way of Pietersen‚ who was unmarked at the back post but fluffed his chance because he was put off by his teammate.

Ajax looked better in the second  half but could not turn possession into chances.

On the counter attack‚ Craig Martin almost made it 2-0 with a diving header from Lakay’s cross that went narrowly over the top.

But Teko Modise’s introduction allowed City to come back into the fray in the last minutes and it was he who helped Lakay to set up Moseamedi for the second goal which just crossed the line before Rheece Evans disparing effort to clear it off the line.

“ They started better than us‚ we were a bit too defensive.

"We came back into it in the second half but we didn’t create too many chances.

"We were too static at times.

"We made too  many mistakes‚” was the reaction of Ajax coach Stanley Menzo. - TimesLIVE