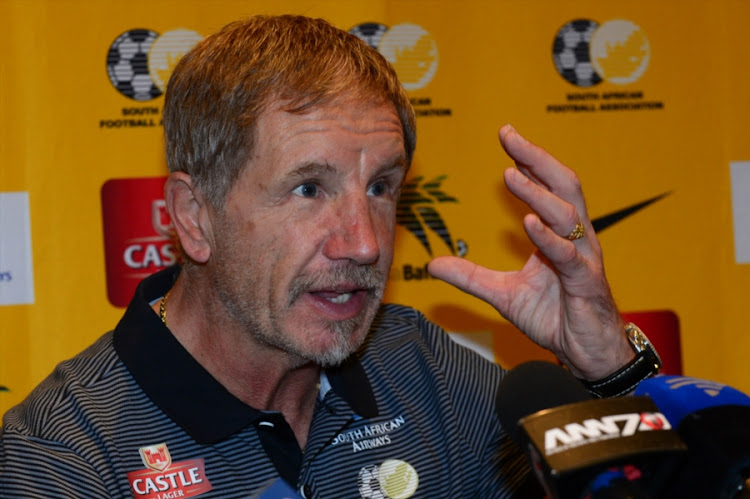 It is becoming increasingly unlikely that Bafana Bafana will attend next year’s World Cup as participants and coach Stuart Baxter has conceded that he’s not ready to start thinking about the kind of reception he is likely to get should Burkina Faso extinguish SA’s faint hopes at FNB Stadium on Saturday afternoon.

Bafana host the Group D leaders in a must-win 2018 World Cup qualifier that could either finally end SA’s slim hopes of qualifying or continue to feed the illusion that they can somehow find a way to Russia next year.

The back-to-back defeats to Cape Verde last month have condemned Bafana to the foot of the group table and Baxter is well aware that the South Africans will need the stars to align perfectly if they are to rescue their faltering campaign.

“My thoughts are I do not want to have too many thoughts (about Saturday’s game)‚” a candid Baxter said.

“All of what you have told me now (the insurmountable odds Bafana face)‚ I could walk outside and just hang myself you know.

“You know‚ if we had beaten Cape Verde twice …….. it’s a massive game (on Saturday).

“If you do not win the games that you should win‚ then the biggest problems for me‚ the biggest issue we are facing in this camp is not all the possible scenarios because we have got no control of that.

“What we’ve got control over is our performance against Burkina Faso.

‘‘The biggest problem the players will have is that they’ve just come off two games (against Cape Verde) where they've underachieved in both games.

“It is about addressing the issue of self-confidence‚ of self esteem‚ of self image‚ of all those selfs here.

“So that is what I’ve got to concentrate on.”

Baxter said the Burkinabe are the best team in the group and Bafana will need to raise their game considerably if they are to overcome the Group D favourites.

The Burkinabe have gone about their business quietly since arriving in SA early this week and a win on Saturday would bring them closer to qualifying for the World Cup for the first time.

Baxter said he was aware that his charges have to work very hard at restoring public confidence in the team and how they perform against the West Africans will be important.

“Now we have got to put things right against Burkina Faso‚” the Briton said.

“Without confidence‚ I do not think that we will do that.

"They are a good team and I think that they are the best team in the group.

“I’ve watched their games against Senegal (the two teams drew 2-2 and 0-0) and they were very competitive in both games.

“I think they were closer to winning those games than Senegal were.

‘‘They are a powerful team‚ they are a physical team and they have got certain players with extreme qualities.

“This is it‚” Burkina Faso’s former Chelsea forward Bertrand Traore has said about Saturday’s Russia 2018 qualifier against Bafana Bafana at FNB ...
Sport
4 years ago

'We need to redeem ourselves,' says Bafana Bafana defender Hlanti

Three days of interviews and training sessions and we are yet to see the rallying cry‚ the inspired call to arms‚ from one Bafana Bafana player to ...
Sport
4 years ago

Burkina Faso coach Paulo Duarte has many reasons for being mystified as to why Bafana Bafana‚ his side’s opponents in Saturday’s World Cup qualifier ...
Sport
4 years ago