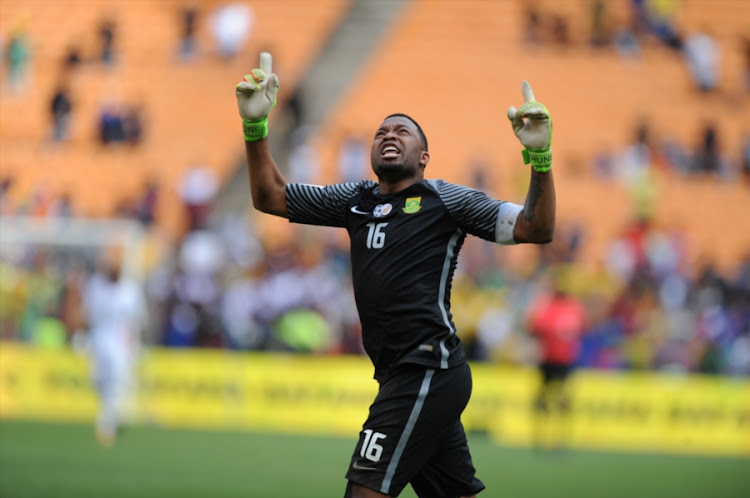 If Itumeleng Khune is not the best distributing goalkeeper in the world‚ then he is at least the best Bafana Bafana coach Stuart Baxter has seen.

Never mind the ability to control his area better than any other goalkeeper in South Africa‚ as displayed again as Khune made a telling return from injury in Bafana’s 3-1 World Cup qualifying victory against Burkina Faso at FNB Stadium on Saturday.

And never mind that he makes better saves too.

Khune’s distribution‚ landing balls on Andile Jali and Percy Tau on Saturday that set up Bafana’s second and third goals‚ is perhaps the best in the world for keeper‚ Baxter said.

“I’ve coached a lot of goalkeepers all over the world. And if you’re talking about distribution‚ then ‘Itu’ is world-class‚” Bafana’s coach said.

“My son (Lee) is a goalkeeper-coach and he tells me he’s never seen anybody distribute the ball as confidently.

“And I have to admit when I first came to Kaizer Chiefs and he was kicking balls through the midfield and hitting the strikers I was like‚ 'Ooh' (indicating wincing in discomfort).

“So‚ yes it’s a weapon. And we do pride ourselves on being mobile and quick‚ and we want to release those players as quickly as we can‚ before the opponents get set.

“I don’t think I’ve seen anyone better than him. I’m sure you can throw up a few in Brazil or Argentina who are close to him. But I think he’s probably the best I’ve ever seen.”

Khune’s assured control of his area and distribution were perhaps the most important aspect of a turnaround for Bafana from their defeats last month against Cape Verde.

It made even more impact than Percy Tau’s explosive introduction up-front‚ and Andile Jali and Kamohelo Mokotjo impressing further back.

Bafana Bafana beat Burkina Faso in Saturday’s World Cup qualifier with a knife at their throats‚ said coach Stuart Baxter in reference to the public ...
Sport
3 years ago

Cape Town City winger Lyle Lakay has extra motivation for winning the MTN8 final as victory will turn him into an instant hometown hero in ...
Sport
3 years ago

Iceland's soccer supporters were in raptures on Monday as they celebrated in the capital and across the country after the national team qualified for ...
Sport
3 years ago
Next Article